The Obama administration has worked tirelessly towards nuke reductions in recent months, signing an arms control treaty with Russia and... 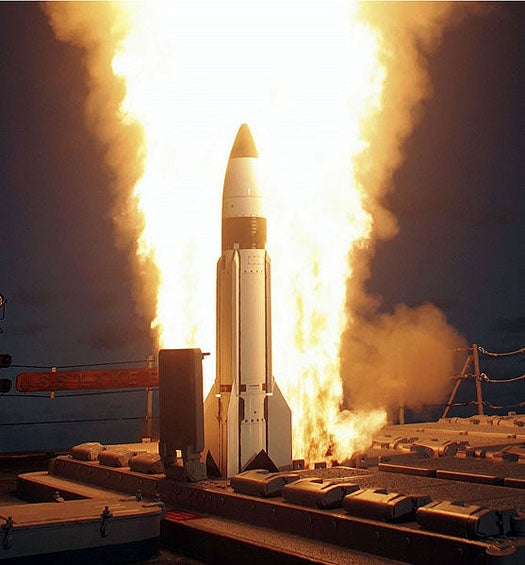 The Obama administration has worked tirelessly towards nuke reductions in recent months, signing an arms control treaty with Russia and ratcheting up the rhetoric — and the promises of further sanctions — towards Iran. But at the center of President Obama’s arms reduction campaign is an antimissile defense rocket known as the SM-3, and depending on who you ask the interceptor is either “proven and effective,” or an absolute failure 80 percent of the time.

Two physicists from MIT and Cornell published a new analysis of the SM-3 in the May issue of Arms Control Today critiquing 10 tests of the SM-3 conducted between 2002 and 2009. The Missile Defense Agency and the Pentagon have hailed these tests as successes, with the interceptors nailing their targets 84 percent of the time. But MIT’s Dr. Thomas Postol and Cornell’s Dr. George Lewis claim that success rate is closer to 20 percent.

At issue is whether or not the SM-3 is actually capable of destroying the warhead aboard an ICBM as opposed to simply destroying the launch vehicle. The interceptor contains what’s known as an exoatmospheric kill vehicle, which uses an onboard telescope to look across space for telltale signs of an incoming rocket. Once the target is acquired, the kill vehicle slams into it, destroying it via impact.

Postol and Lewis argue that missiles — particularly ICBMs — are big vehicles, with their warheads being but small parts of the whole. Though the SM-3 indeed makes contact with incoming threats with regular frequency, it only struck the warhead directly in tests twice out of ten tries. That means the warhead could still be loose in the atmosphere, free to fall wherever gravity takes it. And, as Postol points out to the NYT, if we merely nudge a missile headed for Wall Street off course enough to hit Brooklyn, we can’t call that a success.

The Pentagon claims that in tests their mock warheads were destroyed in the breakup of the launch vehicle, regardless of whether the SM-3 scored a direct hit to the warhead of simply impacted the carrier vehicle. But Postol and Lewis argue that mock warheads are far more fragile than actual nukes, which are designed to withstand the heat and stresses of space flight.

As such, the difference of a few inches could be the difference between a kill for the SM-3 and a nuclear strike for the enemy. Those are an important few inches, not just for the future of the SM-3 but for Obama’s nuclear policy. The SM-3 is at the core of his nuclear agenda regarding Russia, Israel, and Iran, not to mention his rationale for cutting America’s nuclear arsenal.