NASA Satellite Discovers Life on Earth, Which Could Help it Find Life Elsewhere

Among NASA’s top priorities is the goal of locating life in the universe and it has – on Earth. But... 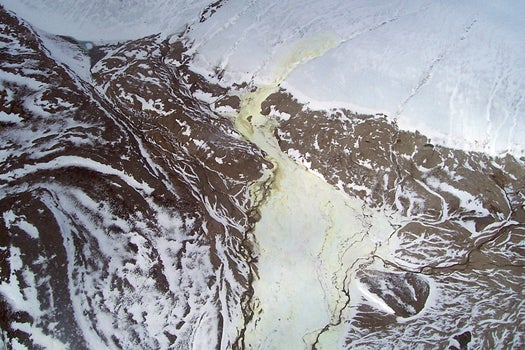 Among NASA’s top priorities is the goal of locating life in the universe and it has – on Earth. But in doing so, NASA may have found a new tool to help it seek out life elsewhere in our solar system. An imaging satellite has located microbial life on the ground from space for the first time. And if it can do that here, it stands to reason that the technology might be able to do so on other planets as well.

NASA’s Advanced Land Imager (ALI) riding on the EO-1 satellite spotted a small patch of yellow ice in the Canadian Arctic that is the only known place on Earth where sulfur is pumped to the surface by natural processes, much like a spring. Looking down form a helicopter the stain is visible but from space it is very hard to spot.

So NASA engineers went looking for it in the invisible part of the spectrum using a hyperspectral sensor on ALI called Hyperion. From that data, researchers were able to identify the discolored ice by the chemical signature of sulfur, which was strong enough to be visible (strong enough, in fact, that researchers can actually measure the amount of sulfur from the Hyperion data alone).

But none of that has anything to do with life. The underlying processes, however, are the key to this discovery. This particular sulfur starts out in the seawater beneath the Arctic as hydrogen sulfide. It’s only after microbes in the water strip the hydrogen away that the sulfur alone rises up to stain the ice, which acts as a big yellow arrow pointing to the microbial life below.

As Discovery News astutely points out, this Canadian Arctic scenario is like a microcosm of other rocky, icy bodies in the universe, specifically one in our solar system: Jupiter’s moon Europa. We know Europa is icy and we suspect there may be liquid oceans beneath that ice that could theoretically harbor life. While sending a Europa rover to the planet to drill through the surface sounds fun and all, it would be a lot easier to send an orbiter, sporting Hyperion-like sensors, to go search for the telltale signs of life beneath the ice.

It’s clearly an idea in its infancy, but it’s a pretty cool one.