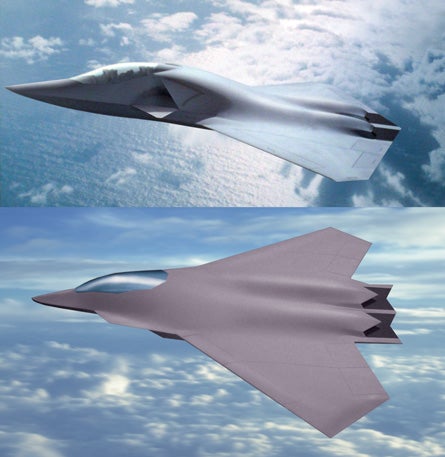 Stealthy military planes like these are still years away — the military probably won’t need new fighter jets until 2025 or so. But if Defense Secretary Robert Gates’s words in a speech given over the weekend are any indication, big spending on futuristic fighters might be even farther away than that.

In a speech given on the 65th anniversary of V-E Day, Gates echoed former President Dwight Eisenhower’s caution against a military-industrial complex. He said the military is wasting money it can no longer afford to spend, and that it’s going to stop.

“The attacks of Sept. 11, 2001, opened a gusher of defense spending that nearly doubled the base budget over the last decade,” Gates said. “Military spending on things large and small can and should expect closer, harsher scrutiny. The gusher has been turned off, and will stay off for a good period of time.”

He added that the US battle fleet is still larger than the next 13 navies combined, 11 of which belong to allies, and that in 10 years, the US will still have 20 times more advanced stealth fighters than China.

Gates has already canceled or trimmed several weapons programs, including spiking the controversial $11 billion presidential helicopter, ending production of the F-22 Raptor, and other cuts. He added money to the F-35 Joint Strike Fighter program, but said the Pentagon would not fund a special redesigned engine for the planes.

His cost-cutting measures could save about $330 billion, the New York Times reports.

Future-focused plans may also be on the chopping block, as Gates emphasized shifting spending from support services to the direct costs of fighting wars. He’d already cut $87 billion from the vehicle portion of the Army’s Future Combat Systems program, for instance.

Military contractors might also be concerned about a leaner Pentagon budget. But that didn’t stop Boeing from shopping the above photos around late last week. According to FlightGlobal both twin-engine planes could fly either with a pilot or without. The planes would replace the F/A-18E/F Super Hornet, which has only been around since 1999. What’s more, a carrier-based iteration of the Joint Strike Fighter program is already due to replace the Navy’s Hornets.

But with even the F-35-Lighting JSF on the hot seat recently — and the Pentagon cutting funds for more C-17 workhorses — planes like these might be in the distant future.