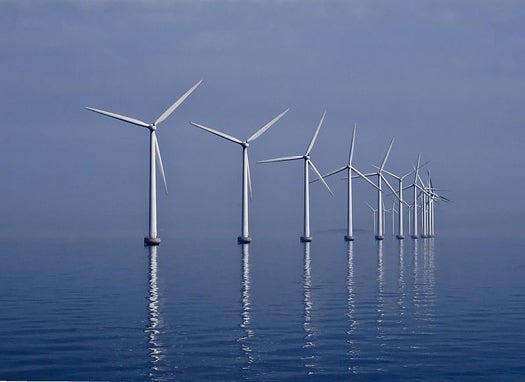 The long-term goal of generating 1,000 megawatts for Ohio by 2020, but the deployment of turbines won’t start out so ambitiously. GE has committed to producing enough infrastructure to build and maintain an initial 20-megawatt farm slated for completion by the end of 2012, though we’ll see just how quickly GE and its partner, the Lake Erie Energy Development Corporation (LEEDCo), can cut through the reams of red tape that are sure to pile up. That initial farm will spring up off the Erie shoreline close to Cleveland.

The locations of future projects have yet to be determined, but wherever those projects unfold they are likely to be big. The entire scheme is based on GE’s latest-gen 4-megawatt turbine (which we detailed exhaustively in April’s How It Works issue), a sizeable generator even by progressive standards – most land-bound wind turbines in places like Texas are rated for 1.5 to 2.5 megawatts, though even the very largest generally don’t run at capacity.

That makes the Lake Erie Project quite an important venture, not just for proving that the next generation of turbines can hack it in the field, but also that offshore projects in interior lakes can work. If GE and LEEDCo can make their 20-megawatt farm work, we’re promised another 980 megawatts of wind energy in Ohio alone. But a success in Lake Erie would more likely open the floodgates for many, many more projects in the coming decades that could benefit many land-locked states in the upper-Midwest.