Researchers at Rensselaer Polytechnic Institute have turned a sheet of nano-thin gold into what could be the next big advance... 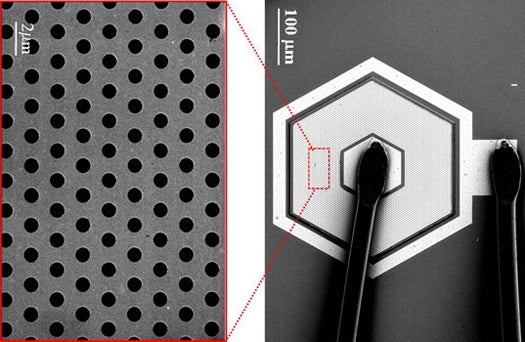 Researchers at Rensselaer Polytechnic Institute have turned a sheet of nano-thin gold into what could be the next big advance in infrared technology. Taking advantage of the unique properties of gold at the nanoscale, scientists there have created a “microlens” system that could boost detectivity in quantum-dot-based IR detectors by 20 times.

Enhancing IR sensors is difficult because, as a general rule, increasing the amount of signal a detector takes in also increases the amount of noise it takes in, spoiling the benefit derived from increased exposure. Current mercury-cadmium-telluride (MCT) tech takes in a strong signal, but the long exposure times necessary for low-signal imaging also allow for increased noise, making it tough to expand further on conventional detectors.

The Rensselaer researchers instead looked to the nanoscale properties of gold to build a new kind of detector. These quantum dot infrared photodetectors (QDIPs) have long, flat surfaces covered with a thin layer of gold about 50 nanometers thick. That surface is riddled with tiny holes about 1.6 millionths of a meter in diameter, each one containing a quantum dot — a nanocrystal with unique optical properties.

The layer of gold focuses the incoming light into each hole more directly, strengthening the contact with the quantum dots inside. That stronger signal in turn boosts the dots’ ability to turn photons into electrons, creating an electric field up to 4 times greater than the energy that enters the detector. In that sense, the gold layer acts like a lens, magnifying the incoming light. But laying down that 50-nanometer layer of gold is far easier — and far cheaper — than arranging and calibrating millions of tiny lenses.

So far the researchers have created an IR sensor twice as sensitive as conventional MCT detectors, but the numbers say they should be able to create QDIP devices that are 20 times better than the ones we have today. That means better medical imaging and night vision here on Earth, but the really benefits could be high above us. A 20-fold increase in our ability to scan the heavens in infrared could help astronomers see things that are currently invisible to our best IR telescopes.