The Israelis are developing a hovering, rapidly deployable eye in the sky that smartly skirts the usual problems associated with... 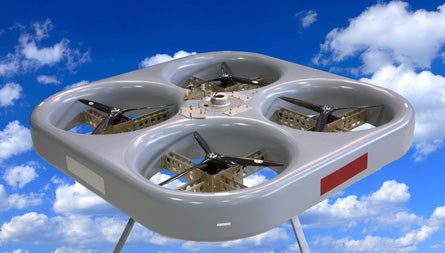 The Israelis are developing a hovering, rapidly deployable eye in the sky that smartly skirts the usual problems associated with hovering aircraft. Israel Aerospace Industries has worked up two functioning prototypes of a hovering platform that launches from a moving vehicle to which it is tethered, leaving the heavy power source that usually drags down hovering platforms on the ground below.

The electric tethered observation platform (ETOP) can carry 44 pounds up to 328 feet, making it an ideal platform to carry observation equipment and sensors to higher vantage points so troops on the ground can see what’s all around them. The platform’s four propellers can hover at predetermined altitudes for durations limited only by the power source on the ground, which pipes power to the machine via its tether.

The fact that ETOP can be launched from a moving vehicle or a fixed location on the ground offers added versatility, especially for military applications. Israeli security forces spend a good deal of time operating in urban environments, and the ability to quickly deploy an observation platform that offers a 360-degree bird’s eye view of an operating area would offer troops on the ground a distinct advantage when hunting the enemy or maintaining a secured area.

And might one be able to weaponize such a platform? We’ll leave that kind of ingenuity to the Israelis, but 44 pounds is a decent enough payload. Israel Aerospace has already completed ten successful test flights with one prototype, with a second prototype now operating. ETOP should be operational by 2011.