Video: In Pioneering Study, German Robots Given the Chance to Stab Humans

First ever study of how robots attack tests their murderous ways 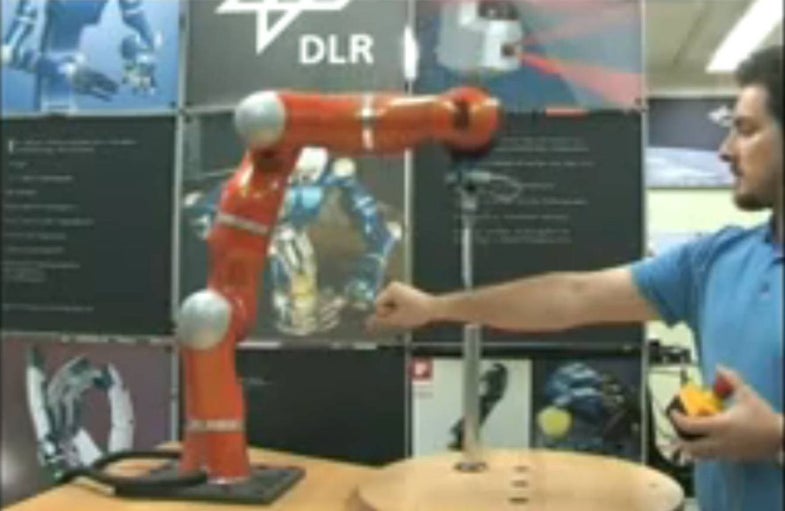 Robots run amok have occasionally maimed or killed industrial workers, giving German researchers cause to wonder about a future where humans host robots in every home. In their study, the BBC reports, a robot arm was programmed to strike, stab and puncture using an array of household tools that included a steak knife, kitchen knife, scissors and screwdriver. Stabs and cuts inflicted on a silicone lump and the leg from a dead pig were deemed potentially lethal.

Human volunteers also subjected their arms to the tender mercies of the slasher bots, but only when a prototype safety system was engaged. The collision detection system used torque sensors to spot when it hits a different substance and freeze in mid-motion, so that damage to the human subjects was limited.

We’re still a bit puzzled as to why human volunteers were in this experiment at all, when there’s perfectly good ballistic dummies being eviscerated every week on Spike TV’s Deadliest Warrior. But perhaps the Institute of Robotics and Mechatronics at the German aerospace agency felt human arms would represent a less expensive option.

The study was presented at the 2010 IEEE International Conference on Robotics and Automation, held in Alaska earlier this month. We’re all for developing safety systems that engage for robots too dumb to recognize Asimov’s Laws of Robotics, but we’d still recommend carving your own steak in the future.