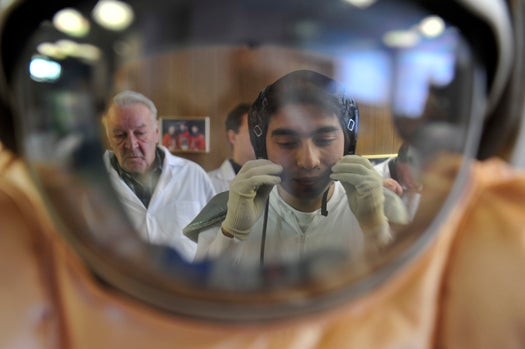 The first two members of Russia’s upcoming 18-month “Mars mission” have been selected by the European Space Agency; Frenchman Romain Charles and Colombian-Italian Diego Urbina will join 3 Russians and one Chinese national in the Mars500 spaceship, which will carry out a 520-day simulated mission to Mars beginning June 3.

Let’s hope they all get along.

The upcoming mission follows on the success of last year’s precursor isolation experiment, in which a crew of six was sealed inside a fake “spacecraft” in Moscow for 105 days. During that time researchers studied the effects of isolation on the crew, as well as the strain of close living quarters and working conditions. That mission simulated an abbreviated trip to the Red Planet; the upcoming “journey” will mirror the real thing.

At 520 days, the mission will mimic an actual voyage to the Moon and back. The sealed containers (again in Moscow) in which the mockup mission will unfold contain not only a spacecraft, but a Mars lander a Martian landscape as well. Around 250 days in the crew will be split, with half of the astronauts moving into the lander for a simulated trip to Mars’ surface. There will even be a simulate spacewalk, in which the crew will suit up in modified Russian Orlan spacesuits. For the duration, the crew will be constantly monitored for both psychological and physiological signs of stress or deteriorating wellness.

Those chosen to go to the “surface” will likely relish the opportunity to stretch their legs. Living quarters inside the experiment only add up to less than 20,000 cubic feet. That might sound like a lot, but for a crew of six that’s not a whole lot of space, especially when you factor in the 18-month grocery supply that must be stored on board as well.

There will be communication with the outside world via radio and email, but radio communications will be delayed a full 20 minutes as they would be on a real interplanetary mission and emails will take twice that time to get through. Both will be disrupted periodically, because what’s the point of locking six men in a container if you don’t mess with their heads a bit?

The remaining four crew members will be named later this month.