We’re rolling out our annual invention awards today, so it’s perhaps a fitting coincidence that this video should surface of... 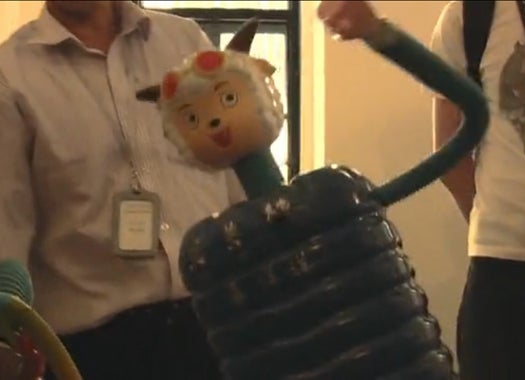 We’re rolling out our annual invention awards today, so it’s perhaps a fitting coincidence that this video should surface of the so-called peasant inventor Wu Yulu, a Chinese farmer and robot hobbyist displaying his whimsical creations at Shanghai’s Rockbund Art Museum.

Following a rich tradition of DIY inventors from China’s interior, Wu doesn’t benefit from university backing or a robotics lab of his own, so he instead scavenges rubbish piles for throwaway parts and the odd aesthetic fixture. As such, some of his creations possess a Tim Burton-esque kind of macabre quality: rust-covered drummer boys patched together from scrap marching tirelessly in a circle, or a remote-controlled child-bot that ambles around with an unnaturally spastic gait.

And what do his robots do? Mostly, they entertain. Some walk around, some hop about aimlessly like children’s wind-up toys, and one simply jumps off a high platform to be violently caught by a rigid cable strapped to his back. But some do possess a certain degree of functionality. “I had no money to buy a car,” Wu says of his rickshaw bot, a yellow humanoid in a straw hat that tows a passenger-bearing rickshaw cart behind. “So I built my own.”