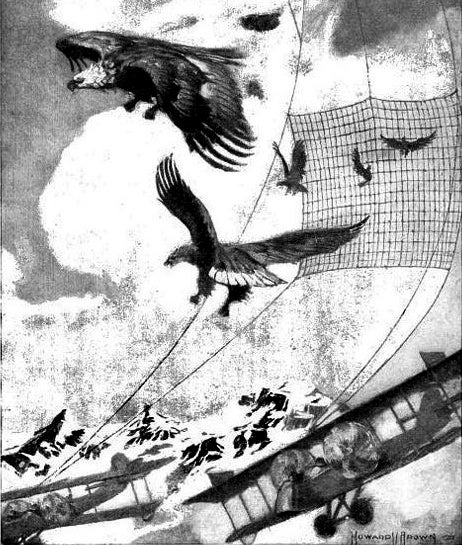 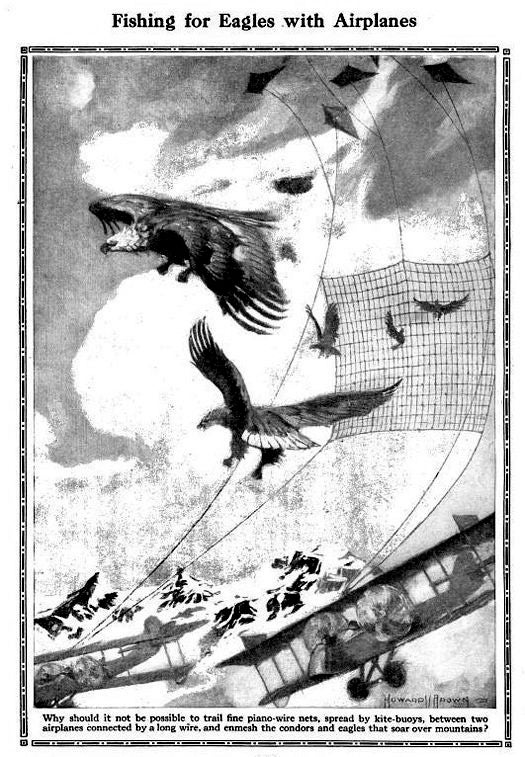 In between sausage balloons, elegant blimps and ill-fated steam planes, yesterday’s archive gallery on aviation yielded a fantastic array of old-school flying machines. After hearing of the Wright brothers’ success at Kitty Hawk, most people were eager to see airplanes drop bombs or transport passengers across the Atlantic, but one Popular Science writer contemplated a hilariously sinister alternative for aerial technology.

His article, titled “Fishing for Birds of Prey in the Air” and published in December 1917, proposed that people use airplanes to capture flocks of now-endangered bird species. Although we’d hate to imagine that our magazine contributed to the slaughter of our national symbol, we can’t read quotes like this one without laughing at our misguided visions of a better future:

“Why should it not be possible to trail fine piano-wire nets, spread by small kite-buoys between two airplanes connected by a long wire, and enmesh the condors and eagles that soar over inaccessible mountain peaks? That ought to be a fascinating sport.”

We promise that there’s more where that came from, and the article is well worth a read, if only for the author’s thorough recommendations on how best to capture a vicious horde of bald eagles. We won’t spoil the best parts for you, so read them for yourself in “Fishing for Birds of Prey in the Air.”

And when you’re done, check out more aviation gems from the archive here.