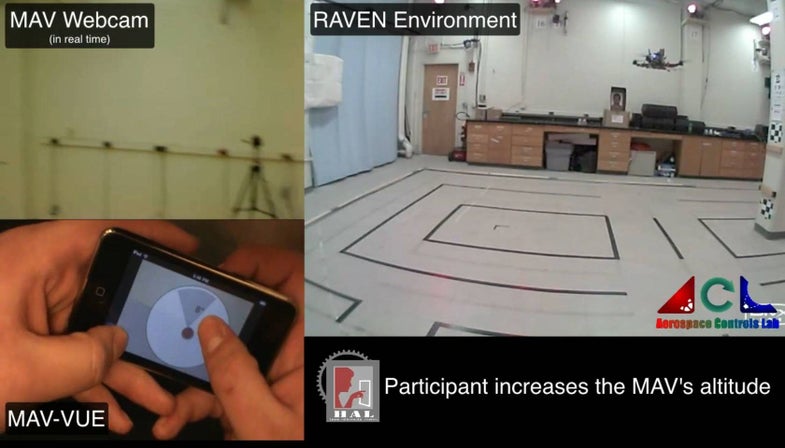 Fleets of unmanned drones have become a common weapon in the U.S. military’s arsenal, but clunky controls and interfaces that distract human operators can lead to costly mistakes and crashes. Such problems prompted a former U.S. Navy pilot to develop an iPhone app that allows any smartphone user to learn how to fly an unmanned aerial system in just three minutes.

Easier control interfaces could drastically cut down on training time and costs, not to mention mistakes. Consider that current military pilots undergo thousands of hours of training to learn how to fly drones.

“This is all about the mission — you just need more information from an image, and you shouldn’t have to spend $1 million to train someone to get that picture,” said Mary “Missy” Cummings, an MIT aerospace and systems engineer.

Cummings once flew F-18 Hornets for the U.S. Navy, and saw fellow fighter pilots die in aircraft carrier landing mishaps. Since then, she has devoted her research at MIT’s Humans and Automation Laboratory (HAL) toward making it easier to fly drones and interact with technology.

That means less time spent fiddling with menus or trying to zoom a camera, and more time focused on the task at hand — whether that involves trying to I.D. a sniper or search for victims after a natural disaster.

The HAL group recently ran experiments where participants controlled a drone via smartphone so that they could read an eye chart and find a photo within a building. Cummings and her students hope to eventually test the app in the real world and fly the drone up to 500 feet.