Bruce Dell doesn’t have a college degree or work for a major video game producer, but he might just change... 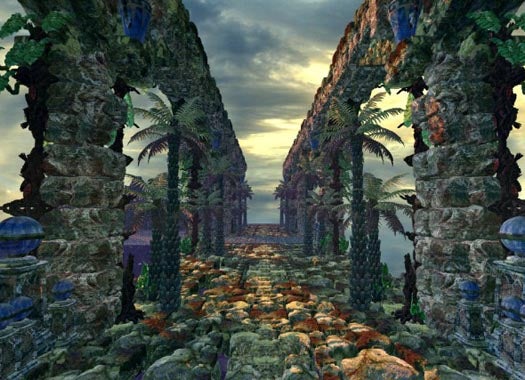 Bruce Dell doesn’t have a college degree or work for a major video game producer, but he might just change video game animation forever. The Australian hobbyist claims his new technology, Unlimited Detail, can turn out computer-generated graphics sans graphics chips or massive processing power. Rather, he claims his system offers unlimited graphics power that is software- rather than hardware-based, meaning there is no end to the amount of detail one can render.

Dell explains how all this works in fairly rich detail in the video below, but to summarize, Unlimited Detail sheds the usual polygon construction of virtual worlds in favor of a kind of point-cloud construction. Imagine the 3-D equivalent of pixels (like “little 3-D atoms” as Dell says), making up the entire virtual world from little points of color, much as the real world is constructed of tiny building blocks.

This kind of construction isn’t completely new, but it is limited by the fact that each point requires a little bit of processing power. Rendering huge 3-D worlds like the ones in modern video games would require trillions of points, and rendering that many points per frame is impossible by modern computing standards; the real time demands of games make the idea completely unfeasible.

Dell’s software, he claims, gets away with this by acting as a search engine rather than a graphics engine. Build a world out of points, and Unlimited Detail’s software searches, in real time, for only the points in the cloud needed to render a view from a certain perspective. Detailed algorithms search through point-cloud data to find the right “atoms” to build only the scene you need at that moment, which equates roughly to one point for every pixel on the screen. Suddenly, you don’t need to process billions or trillions of points anymore; the underlying points go unprocessed and only the visible ones are rendered.

At least, so says Bruce Dell. Very few people have seen the software in action (he’s still collecting his IP protections), and according to Wired companies like Nvidia are skeptical that his concept will work. You can hear it from Dell below and decide for yourself, but if he can deliver on what he promises in this video, gaming will never be the same.