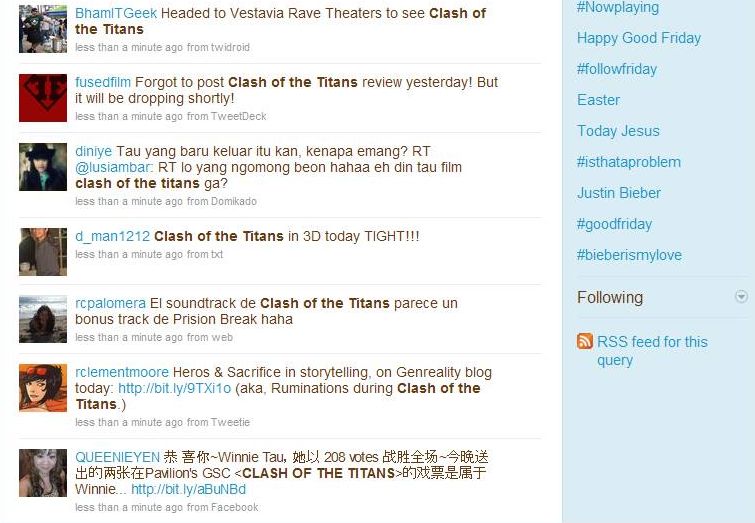 Tapping into the wisdom of the crowds to forecast future trends has served prediction markets well for years, but Twitter might be even more effective than even the biggest and most widely used market, the Hollywood Stock Exchange. In a recent study, watching tweets among Twitter users allowed HP Labs researchers to predict box office figures better than the Hollywood Stock Exchange, Fast Company reports.

For opening weekend, their computer model monitored the rate of tweets near a movie’s release date and also factored in the number of theaters showing the flick. That allowed the model to predict the opening weekend revenues with 97.3 percent accuracy, compared to the Hollywood Stock Exchange’s 96.5 percent accuracy.

For the second weekend, the model examined both tweet rates and the ratio of positive to negative tweets. That different approach reflects second-weekend performance success based on word-of-mouth, rather than opening-weekend performance buzz. Again, the model delivered quite splendidly with 94 percent accuracy.

There’s a few caveats to keep in mind, such as the fact that the Twitterati represents a certain self-selecting slice of society. One expert told Fast Company that he suspected Twitter might do better for predicting “upmarket” films aimed at somewhat older audiences, given the social media service’s user base.

But there’s an exciting possibility for extending Twitter’s predictive power beyond movies, the researchers say. A similar model could apply for any number of commercial products beyond Hollywood fare, and might work especially well for products or trends that lack prediction markets such as the Hollywood Stock exchange. Presidential election results, anyone?

Twitter might even go beyond a mere forecasting service for commercial success. Technology Review suggested that the social media service could also allow marketers to directly influence the success of their product by boosting tweet rates — although we assume that strategy would require more savvy than using obvious Twitter bots.

There’s also a good opportunity here for savvy prediction market players, if they can apply a bit of Twitter analysis to how they play the Hollywood Stock Exchange. We hear that HSX has recently transitioned to real money.