Stealthy Nanoprobe Slips Seamlessly into Cells Without a Trace of Damage

The device could allow for better medical implants, integration of artificial limbs and longer monitoring of brain cells 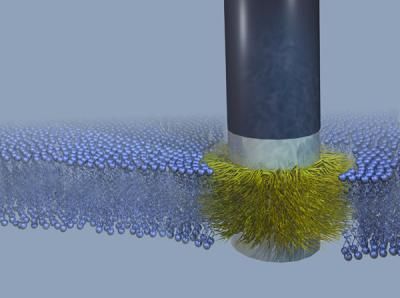 A new nanoprobe can slip stealthily into a cell and give researchers an opening to monitor the cell’s insides for up to a week. That could make the tiny inorganic device the first to implant within a cell without damaging it.

Such devices could eventually allow researchers to insert medication into cells, improve attachments involving artificial limbs or deep [, and enable much longer study of signal-firing neurons and other cells.

The 600-nanometer-long silicon probe is somewhat larger than a virus but smaller than bacteria. It penetrates the cell membranes by imitating the design of proteins that normally act as gatekeepers, letting certain thing in or out.

The metal-coated probe may immediately give researchers the ability to monitor the electrical signals within cells as they communicate with each other or respond to medication. That would replace the current method of using a “patch clamp” to monitor cell signals, which suctions open a hole in the cell wall and kills the cell within an hour or two.

“If the stealth probe will give us a long-term patch clamp, we’ll really be able to get the ability to watch these networks over long periods of time, perhaps up to a week,” said Nick Melosh, a materials scientist and engineer at Stanford University.

But first, Melosh and fellow researcher Benjamin Almquist want to test the probe’s functionality in carrying out all those applications. They’re working with human red blood cells and cervical cancer cells, as well as hamster ovary cells.