Robots can be much more helpful than people. We’re not talking about Roxxxy or that ‘bot that serves up kebabs,... 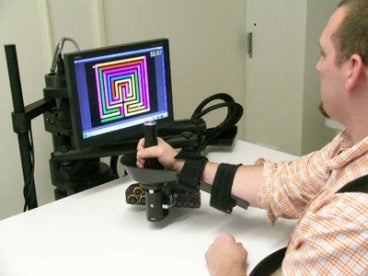 Robots can be much more helpful than people. We’re not talking about Roxxxy or that ‘bot that serves up kebabs, but a robot therapist developed at MIT that has improved upper body motor skills in chronic stroke survivors even if the stroke occurred years previously. And — to address the concerns of the day — it did so without significantly increasing health care costs, and could in fact drastically reduce the cost per patient in the future.

A study recently completed on the MIT-Manus robot showed that in just six months, survivors of chronic stroke enjoyed a modest improvement in upper body motor skills when compared to a control group that received traditional, human-based physical therapy. That not only proves that robotic therapists could provide a significant benefit over their human counterparts, but also challenges the widely accepted notion that stroke victims cannot benefit from physical therapy after the first six months after the stroke.

The system resembles a small arcade console; the patient’s arm and hand are strapped to a robotic handle that is set before a screen on which a variety of small tasks are presented. In a typical task, a target — moving or stationary depending on the exercise — presents itself and the patient tries to navigate the handle toward the target. If the patient begins to wander off course, or does not move at all, the robot gently nudges the joystick in the correct direction, helping the patient rebuild the neural connections that allow for motor function.

The benefits don’t stem purely from the robotics. A second control group received a highly intensive version of human-based therapy that resulted in their making the same number and intensity of movements as the robotic therapy. That group showed similar improvement to the robot therapy group, indicating that it’s the intensity of training, not who is giving it to the patient, that is responsible for improving motor skills. But the human-intensive therapy was created for experimental purposes only and isn’t offered to the average patient; it is too expensive and inefficient to task human therapists with such a regimen. A robot, however, is more than happy to put in the hours.

After 36 weeks, the cost per patient using the robotic therapy was only marginally higher than the cost of traditional therapy. But the robotic cost will drop significantly if the robot tech is scaled for wider production, and it likely will be at some point; now that the MIT team knows the robot therapist works, they’re working on incarnations that can help with MS, spinal cord injuries, and cerebral palsy.