Over 100 times sharper than Hubble images 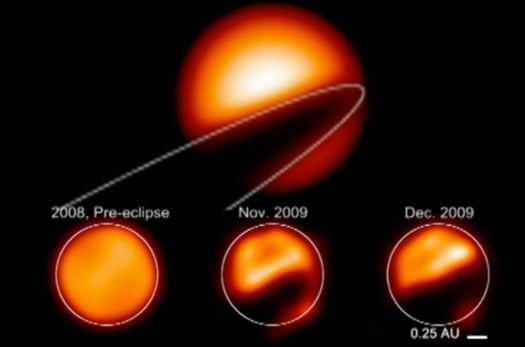 In an image that the residents of Middle Earth might find unnerving, an international coalition of scientists have captured images of a two-year eclipse that are the first close-ups of such an event beyond our solar system.

The researchers combined light from four different telescopes to snap the magnified shot of the massive stellar eclipse in which the star Epsilon Aurigae is almost completely obscured by the passing of a cloud of dust, a cosmic flyby that occurs once every 27 years. The combining of light from multiple sources to create the images — known as optical interferometry — allowed the researchers to create an image 140 times sharper than those gathered from the Hubble Space Telescope.

But multiple powerful telescopes alone weren’t the only key to the team’s success; a St. Andrews physicist, Ettore Pedretti, built the infrared camera that snapped the images in superfast succession, combining the four channels of light as it went. Another St. Andrews researcher, Nathalie Thureau, built the optics that made the combining of light possible.

The resulting are something the team describes as Tolkien-esque — a large glowing orb slowly engulfed by an encroaching darkness.

“It is like seeing the vessel of the sun, guided by the Maya Arien, being swallowed by the dragon Smaug and plunging Middle Earth in a second-age of darkness. It is a terrifying image,” said Dr. Pedretti.

But don’t let that symbolism fool you; as optical interferometry techniques like the one employed here get better and better, researchers will be shedding light on all kinds of dark corners of the cosmos.

See the images strung together in video via the PhysOrg link below.