Earth Week is upon us, and NASA has prepared a very special gift for the blue planet. Dwarfing the iPods... 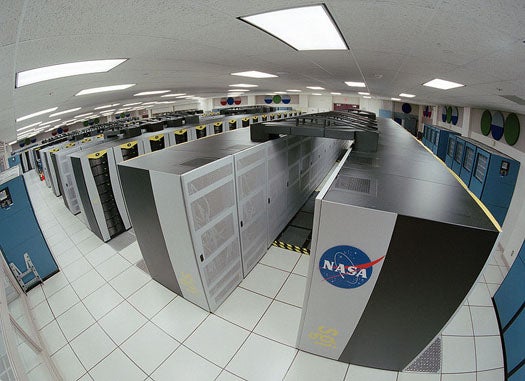 Earth Week is upon us, and NASA has prepared a very special gift for the blue planet. Dwarfing the iPods that we customarily give each other to celebrate another year of existence, NASA put together NEX, a planetary data-crunching tool that uses a 56,832-core, 128-screen supercomputer to blend global satellite data and sophisticated modeling software with an online collaborative culture aimed at helping scientists work together toward better climate change research.

NEX, which stands for NASA Earth Exchange, provides scientists around the globe with the kind of computer power they need to quickly draw up models and gather snapshots of land use patterns, weather systems and other ecological factors that the agency hopes will increase the global output of useful, reliable climate data.

For example, using NEX, NASA scientists were able to cobble together half-trillion-pixel snapshots of global vegetation change over the past 30 years in just ten hours. That sort of data crunching would’ve have taken months longer without NEX’s capacity for data storage and processing, not to mention access to NASA’s library of Landsat images.

But perhaps more importantly, NEX will bring together researchers from across disciplines and across the globe, perhaps helping to circumvent some of the academic politicking that has stymied some earlier efforts at pulling together a comprehensive global climate study. Further, projects carried out on NEX will be available to all users, meaning not only that data sets are reusable for future projects, but data processing and analysis will all be captured, step by step, by NEX. Anyone audacious enough to try to skew the numbers will have some explaining to do.

Pleiades, the supercomputer that runs NEX, has a 1.4 petabyte capacity and will reside at the NASA Advanced Supercomputing HQ at the agency’s Ames Research campus in California.