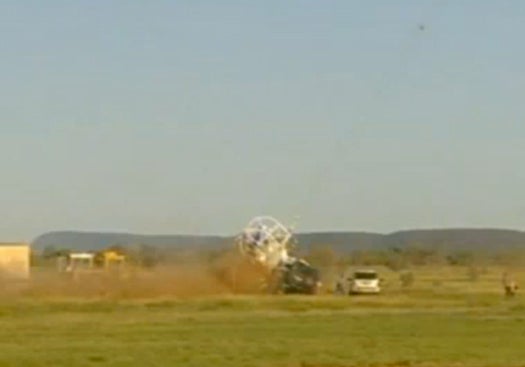 Video captured at the Alice Springs Balloon Launching Center in northern Australia shows the balloon initiating liftoff just before the gondola drops from its carriage to the ground. But the instruments were still partially tethered to the airborne balloon, which proceeded to drag the research platform through a fence and into a parked SUV, which will be needing some body work, as you can see in the video below.

The balloon barely missed a second parked car containing a local couple who came out to see the launch.

The research platform turned wrecking ball contained the Nuclear Compton Telescope, an instrument for detecting “astrophysical sources of nuclear line emission and gamma-ray polarization.” The balloon was supposed to ferry the instruments to about 120,000 feet (roughly 23 miles). The wreckage has been hauled to a hanger, and an initial assessment by officials there found that part of the Compton ‘scope is still somewhat intact, though it’s unclear if the mission is salvageable at this point.