In a speech to NASA employees and the nation on April 15, President Obama unveiled a vision for U.S. space... 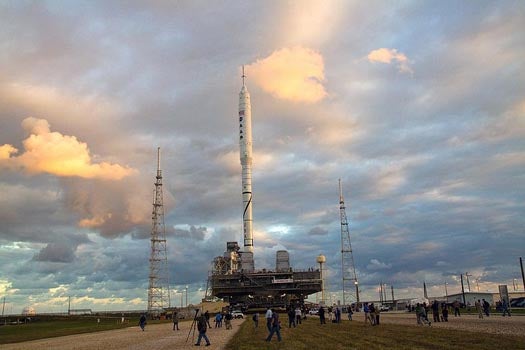 In a speech to NASA employees and the nation on April 15, President Obama unveiled a vision for U.S. space exploration that didn’t include Constellation or development of its Ares I rocket. The next day, Constellation Program Manager Jeff Hanley issued his response to Obama: Not so fast.

In an email dated April 16, Hanley told his managers to prioritize all remaining resources left to them under this year’s budget to prepare for future test flights of the Ares I prototypes. Hanley also instructed staffers to look into repackaging Constellation into a smaller program that could work under a far smaller rocket development budget that Obama and company have supported under the White House’s new vision.

To quote Hanley: “This direction remains consistent with . . . policy to continue program execution and planning in the event that the program or parts thereof will continue beyond (this financial) year.”

In short, backers of Constellation are moving forward as though Obama didn’t just publicly state that he plans to financially emasculate the program. In doing so, they’re demonstrating a belief that Congress may stand behind Constellation and refuse to pass the budget as Obama has shaped it. Indeed, a few members of Congress have openly pledged to fight for Constellation, most notably Sen. Bill Nelson of Florida, in whose district the Constellation tests would fund a few hundred jobs. But the grossly over-budget and behind-schedule Ares I rocket program seems to have little hope of surviving the budgeting process.

But here’s the clever part of Hanley’s email: He never mentions Ares I by name. Hanley seems to be semantically scheming to save Ares by attaching the rocket development plan to the Orion crew capsule, the only part of Constellation that was spared the axe in Obama’s speech. Obama’s vision calls for reorienting the Orion to serve as a lifeboat for the ISS, with launch of a working crew capsule by March 2015. So without ever mentioning Ares I, the email calls for managers to put their remaining budgets toward preserving the part of the rocket program that would allow for test launches of Orion. That part of the program just happens to be the Ares I prototypes.

So is Hanley’s action prudent planning, wishful thinking or guerilla insurgency within the Obama administration? Usually when a President goes on the record in a nationally televised speech and claims he’s going to cut a program that’s not meeting its benchmarks, the program’s fate is sealed. Hanley’s memo didn’t go through NASA HQ in Washington D.C., so who knows what kind of pressure might come down from top brass to change the Constellation program’s official stance on Ares I. But for now it seems hope for Constellation is alive within NASA, though its future doesn’t look very bright.