Magnetic resonance imaging (MRI) is a crucial diagnostic tool and an all-around cool technology that creates three-dimensional views of living... 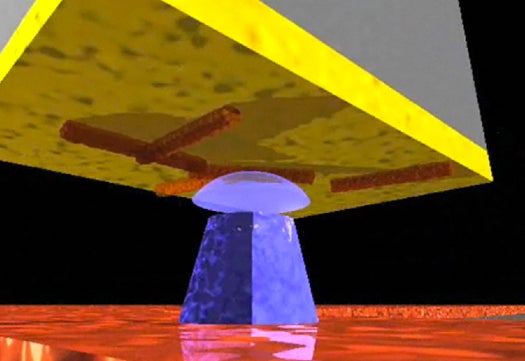 Magnetic resonance imaging (MRI) is a crucial diagnostic tool and an all-around cool technology that creates three-dimensional views of living tissues without being invasive or harming living tissues. But MRI is also limited; while telescopes see further and further into the cosmos and microscopes see smaller and smaller bodies, MRI can only go so small. But now, by blending atomic force microscopy with MRI’s 3-D capabilities, MIT researchers are making a 3-D microscope 100 times more powerful than hospital MRI machines.

Traditional hospital MRI works by registering the very weak magnetic signals that come from hydrogen nuclei. A sample is doused with powerful magnetism that aligns the nuclei’s magnetic spins, which in turn creates a strong enough signal for the machine to pick up.

The result is a 3-D image of the sample that is unparalleled in medical diagnostics, but there is a catch: In order to create a strong enough signal for the machine’s antenna to pick up, traditional MRI requires trillions of atoms to be present in the sample. The best possible resolution is about three millionths of a meter.

While that’s fine if you’re imaging an entire organ, biologists want to image individual cells and even individual proteins. They can do so with electron microscopes, but not without damaging the samples. So researchers began looking for ways to leverage the power of MRI into higher resolution microscopy.

The idea of magnetic resonance force microscopy (MRFM) isn’t new: a theoretical physicist named John Sidles proposed the idea in 1991. Since then researchers have struggled to make the idea pay off, and a collaboration between between MIT and IBM has improved the concept to the point that it can now image with resolutions as low as 5-10 nanometers (that’s billionths of a meter).

They’ve done so by attaching the sample to a very small silicon cantilever (100 nanometers wide). A magnetic iron cobalt tip is eased up to the sample until the atomic spins of the atoms come under the iron cobalt’s sway, which generates a tiny force on the cantilever. The spins are then flipped over and over again, causing the cantilever to sway repeatedly. A laser creates 2-D images from the displacement of the cantilever, which can be digitally stitched into a 3-D image.

It’s not quite electron microscopy but it’s very close, and it doesn’t damage the living tissue under examination, meaning individual viruses and cells can be examined up close and in 3-D for the first time. Such up-close images of protein structures and cell bodies could teach researchers a lot about disease as well as help them figure out better ways to fight it.