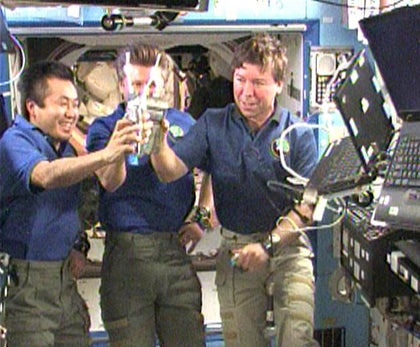 Space station residents could soon get a new choice for drinking water beyond urine, sweat, and vapor. A water generation system which can extract water from hydrogen and carbon dioxide waste products has reached the space station, according to Aviation Week.

The Sabatier Reactor System could create as much as 2,000 pounds of water per year when it officially goes online in several months. It uses the chemical process discovered by French Nobel laureate and chemist Paul Sabatier, who found that elevated temperatures and pressures could turn hydrogen and carbon dioxide into methane and water.

All the methane byproduct will be vented into space for now, but engineers have plans to eventually process the methane into hydrogen and carbon. Hydrogen could then be combined with oxygen to produce even more water or serve as fuel, leaving only the carbon as the waste product.

But the water will feed into the space station’s waste-water system for additional treatment before it gets used. That would help supplement the urine recycler whenever astronauts get thirsty, and would also help the space station survive the new era following the retirement of the space shuttle.

Commercial spaceflight providers such as SpaceX would continue supplying the orbital outpost, but NASA aims to make it as self-sufficient as possible. Hopefully the savings on reduced launch costs outweigh the $65 million contract awarded to Hamilton Sundstrand for having the new service available to astronauts through September 2014.