A Portable Bomb-Sniffing Tool Could Keep Explosives Off Airplanes

When the “underwear bomber” passed through security last Christmas, no one noticed the three ounces of PETN, one of the... 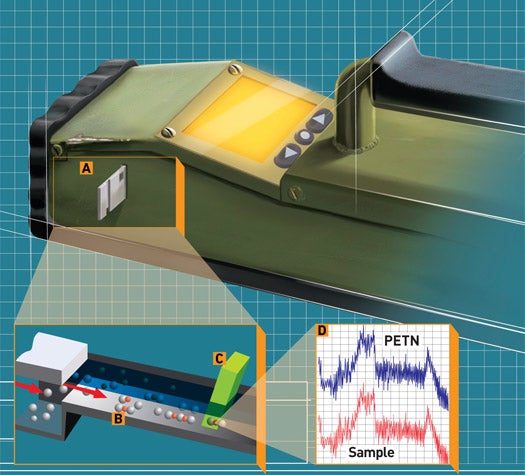 One of the most difficult substances to detect in air is PETN. It has a very low vapor pressure, so few particles of it evaporate and become airborne. Blanddesigns.com
SHARE

When the “underwear bomber” passed through security last Christmas, no one noticed the three ounces of PETN, one of the most reactive explosives, stuffed in his pants. Now a new portable chemical detector, capable of sensing explosives’ vapor at parts per trillion, could finally uncover this and other chemical threats at airports.

The same way the aroma of freshly baked cookies fills a kitchen, a hidden bomb usually sheds trace amounts of chemicals into the air. The device, developed by SpectraFluidics, sucks in these telltale chemicals and traps them in microscopic water channels. A laser zaps the molecules, causing them to vibrate and reemit the light in a signature pattern, which a built-in computer compares with a library of known substances’ patterns. In addition to PETN, it can identify less than a nanogram of other explosives, such as ammonium nitrate and nitroglycerine, as well as cocaine, says Casey Hare, SpectraFluidics’s vice president of systems engineering.

Future applications of the tech could include detecting roadside bombs, food contaminants and cancer markers. But currently the company is testing the device with the U.S. Army, aiming to get a $50,000, brick-size product to the Transportation Security Administration for field-testing by early next year. “Our tool is like an incredibly effective dog nose,” Hare says. “Dogs are the best detector of airborne particles that we have, but they’re not 100 percent infallible. We’re gonna give them a run for their money.”

One of the most difficult substances to detect in air is PETN. It has a very low vapor pressure, so few particles of it evaporate and become airborne.

How to Sniff Out Bombs

1. The security agent plugs the microfluidics chip [A], which lasts for eight hours, into the detector and turns it on.

2. The agent uses the device to suck in air from around a suspicious object and run it over the chip’s water-filled microchannels.

3. Molecules dissolve in the water and bind with the metallic nanoparticles [B], which focus a laser [C] onto them. This causes the molecules to vibrate and emit light based on their unique structural properties.

4. The spectrometer analyzes the light patterns [D], and an onboard computer matches them to known chemical signatures, flashing an alert to the agent if it senses explosives or drugs.