In the French city of Toulouse, the newest craze in sustainable energy is about to hit the streets. Literally. Inspired... 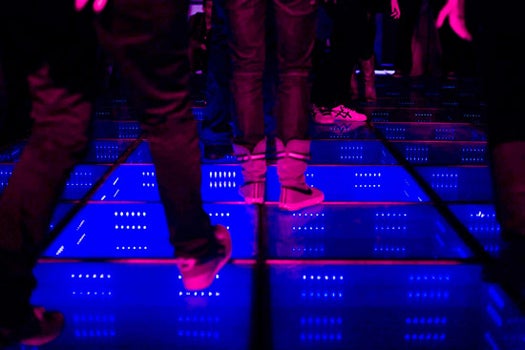 In the French city of Toulouse, the newest craze in sustainable energy is about to hit the streets. Literally. Inspired by a nightclub in Rotterdam, Netherlands, the city of Toulouse has begun investigating the installation of energy-absorbing sidewalk panels that would harvest pedestrian power to fuel the street lights.

The panels, made by the Dutch company Sustainable Dance Club, compress by 0.4 inches every time they are stepped on, and a motor converts that mechanical energy into electrical power. According to Sustainable Dance Club, a person dancing on one of the tiles can generate between 2 and 20 watts, depending on their weight. Toulouse plans to install the panels in the city center, and test them out for two weeks.

However, the fine chaps over at the Register have done some math, and concluded that the panels can’t possibly provide enough power to light the streets. Based on their calculations, even if every resident of the city spent an hour walking every day through a city where every square inch of sidewalk absorbed their energy, it wouldn’t provide enough energy to light the streets or significantly offset the cost of lighting them.

So sure, a large city filled with skinny people may not be the best place to implement this technology. But transport this tech to Huntington, West Virginia, where pedestrians probably generate two or three times the power per person of the average Frenchman, and maybe you could start producing some real power.

[The Guardian, and The Register]