The DoD Wants to Train Soldiers in Immersive Video Games that Respond to EEG, Voice

U.S. armed forces have been using video games to train troops for years, but the Office of the SecDef wants... 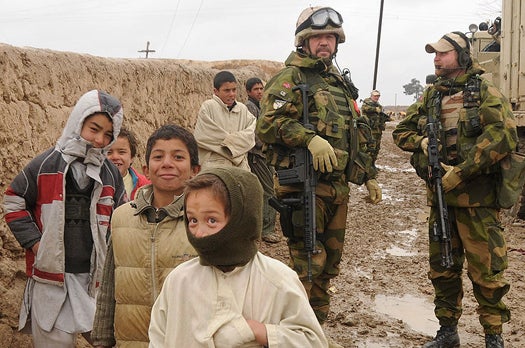 U.S. armed forces have been using video games to train troops for years, but the Office of the SecDef wants something way cooler than the combat simulators of yore. The OSD is soliciting proposals for a new kind of immersive training video that really gets inside troops’ heads, using EEG, eye tracking, voice pattern recognition, and physiological indicators like heart rate and respiration, to help soldiers learn good decision-making skills in high-pressure environments.

This new kind of video game is a direct response to new challenges American troops are facing in places like Iraq and Afghanistan. With major combat operations over, more soldiers are spending more time on the ground with civilians, immersed in unfamiliar cultures and dealing with foreign languages and customs. The OSD wants to teach them how to keep their cool.

As such, the Pentagon is seeking games that respond directly to the cognitive and physiological cues of the trainees. The game then makes adjustments to the gameplay not only to keep it interesting and motivational for the player, but to create challenges that are more realistic for soldiers on the ground. For example, a first person shooter teaches a trainee how to kill, but not how to settle a family dispute in a Pashto-speaking village. The simulator aims to train them in these kind of high-pressure, non-combat situations. According to the solicitation:

“Trainees will be able to speak to and interact at any level with indigenous non-player characters (NPC), complete with voice recognition, speech, and facial gestures. The characters will react according to how the trainee interacts with them. Further the game will track how the local population reacts to these interactions. The game will adapt to changes in local population response. For example, if a player comes in and insults the local tribal leader the game scenario will change and the trainee will find that future interactions with the local population are more difficult and more hostile.”

The OSD wants the game to be customizable depending on rank and status (commanders might learn culture-specific ways to deal with tribal elders, while grunts will learn the proper protocols for approaching and speaking to women in public spaces in a traditionally Muslim city) as well as fire team-immersive, allowing up to four live players in a simulation at a time. As any Call of Duty fan will tell you, there are plenty of games out there that prepare a limber mind for the ins and outs of warfare; this one might actually help soldiers learn how to win the peace.