Congratulations, Spirit! Rover Is Now the Longest-Running Mission to the Red Planet, If It Still Lives

A stuck robotic rover may have overtaken NASA’s Viking probe as the longest-surviving mission on Mars — so long as... 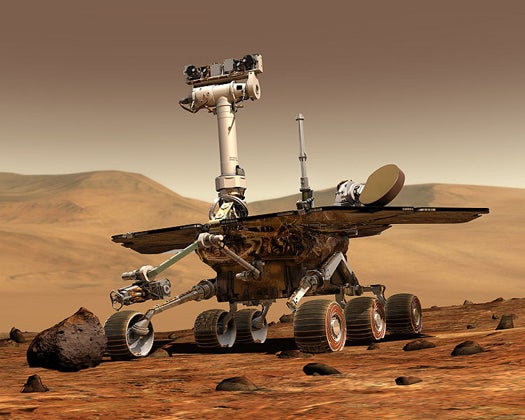 A stuck robotic rover may have overtaken NASA’s Viking probe as the longest-surviving mission on Mars — so long as it’s still alive. But its robotic twin Opportunity could also still grab the record next month if the Spirit rover has slipped into its final winter slumber, SPACE.com reports.

The golf-cart-sized Mars Exploration Rovers have long since outlived their 90-day missions; they both celebrated their six-year anniversaries on the red planet in January. Rather than sigh over the voided warranties, NASA’s rover handlers have celebrated their hardware’s persistence on a rugged and alien world.

Time and tough conditions finally caught up to the rover twins more recently. Spirit had already lost control over one of its six wheels years ago, before becoming stuck in a Martian sand trap back in April 2009. It lost function in another wheel as NASA struggled to free the robotic explorer.

Rover handlers finally conceded defeat in January 2010, after ten months of trying to free Spirit. But they still took the optimistic approach by christening Spirit as an immobile science station. There was still a chance for Spirit to add to the thousands of images it had snapped on Mars, not to mention its scientific achievement of revealing how the planet’s rocks and soil showed signs of extensive water exposure.

Still, a rover which cannot roam faces tough times. Both Spirit and Opportunity depend upon sunlight to feed their solar arrays, as well as periodic dust storms to sweep the panels clean. Spirit entered hibernation mode once the Martian winter set in, and failed to check in with mission managers on March 31.

Despite the communications blackout, NASA remains excited about its rovers beating the original record set by Viking 1. The Viking mission lasted from July 20, 1976 until November 1982, for an operating time of 6 years, 116 days.

NASA may not know for several more weeks whether Spirit has survived. But we’re going to adopt the optimistic view and hold off on writing an obituary for the robot. So congrats, Spirit. Who knows, maybe your intelligence-boosted twin might even know to mark the occasion.