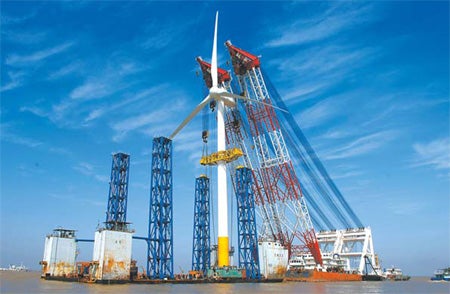 China is already the world’s largest market for wind power, but it’s not stopping with the onshore sites. A 102-megawatt wind farm is slated to hit full power this month in the Yangtze River delta near Shanghai, Technology Review reports. And that’s just the beginning, as Chinese officials opened bids on creating three or four more offshore wind power projects that could generate 1,000 megawatts total.

Energy experts predict that China will have invested $100 billion to install 30,000 megawatts of offshore wind power by 2020. Such projects would help supply energy to 40 percent of China’s population that lives along the eastern seaboard.

The situation is not unlike that of the U.S. eastern seaboard, Technology Review notes. Eastern states hope to generate their own offshore wind power rather than rely upon a supergrid that can deliver wind power from the western states.

But China’s first offshore wind farm has already begun powering up under the auspices of Chinese turbine producer Sinovel. By contrast, a U.S. company called Cape Wind has been waiting on a federal permit to build a wind farm off Nantucket since getting its state and local permits in 2008.

Still, Chinese manufacturers have sometimes struggled with quality assurance, despite helping to supply wind turbines to the U.S. and other nations.

There’s been other offshore action elsewhere in the world. Nine European nations vowed to create a supergrid for sharing offshore wind power at the Copenhagen climate summit in December 2009. And we have the goods on General Electric’s next-gen wind turbine that may capture 25 percent more wind power than conventional models.