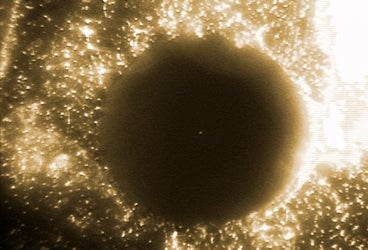 MIT’s experimental motion sensor would use simple physics to create a tiny, six-dimensional sensor that would cost ten times less than the usual motion sensors found in smartphones and air bag systems. It does that by replacing the intricate ballet of moving parts in motion sensors with a simple metal bead and an electric field.

The fluctuating electric field holds the metal bead suspended in a tight orbit within “a hole drilled in a circuit board,” according to Neil Gershenfeld of the MIT Center for Bits and Atoms. Disturbances in that bead’s orbit indicate the sensor’s direction of motion.

That has huge implications for making more precise motion detection in handheld devices. For instance, the Apple iPhone might change its screen orientation more reliably. A Nintendo Wiimote game controller could do away with its three-axis accelerometer — the most expensive component — and forget about the infrared emitter on the television.

The mini-motion sensor might also allow for nifty new tricks such as scrolling through web pages or viewing 3-D virtual objects from different angles based on moving a smartphone in space. Or a pen might digitally record whatever is written with it.

It might even lend a hand to more reliable GPS system based on motion sensing, said Michael Judy, a researcher at Analog Devices, the company behind the Wii’s accelerometers.

As always, there’s still a bit of a gap between lab and application. The necessary electric field in the prototype sensor required voltages around 1,000 volts, which might add power inefficiencies to handheld devices. Still, MIT researchers note that cell phone cameras use about 100 volts, and that a commercial version of their sensor would require less voltage.

Detecting the metal bead’s oscillation also currently requires a miniature camera, but the MIT lab is working on a better optical sensor system that could squeeze into something like a CD player. Try not to breathe too loudly down their necks while they work, fellow geeks.