As if fabricating a new heart from scratch wasn’t impressive enough, the doctors at the Wake Forest Institute of Regenerative... 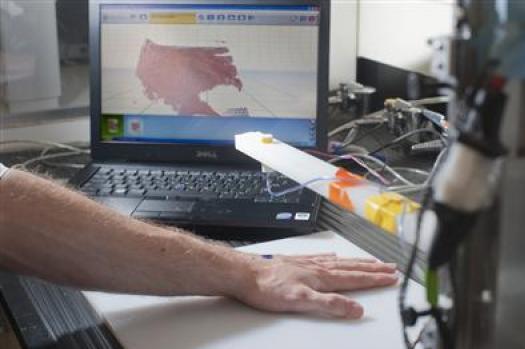 As if fabricating a new heart from scratch wasn’t impressive enough, the doctors at the Wake Forest Institute of Regenerative Medicine have come up with another astounding breakthrough. This time, they’ve designed an inkjet printer-like device that sprays new skin cells onto damaged burn tissue like it was a cheap tan. This device provides a fast alternative to delicate skin grafts, and could eventually be used to close other kinds of wounds as well.

The device itself consists of a tank holding a mixture of harvested skin cells, stem cells, and nutrients, and a computer-controlled nozzle that places the cells exactly where they need to go. The spray works similar to a color printer, first spraying down a layer of fibroblast skin cells as a substrate, and then blasting on a layer of protective keratinocyte cells. Both sprays also contain a slurry of some undeveloped skin cells.

In initial tests on wounded lab mice, burns treated with the cell printer healed in two weeks, compared with the usual five weeks skin grafts take to heal. Additionally, the mice with the printed-on skin showed less scarring and more hair regeneration, as the sprayed-on stem cells better incorporated themselves into all the various cell types of the burned flesh.

Successful mouse tests have driven the Wake Forest scientists onward to tests with pigs, whose skin more closely resembles that of humans. After the tests with pigs conclude, the doctors can finally move on to human trials, and eventual FDA approval. Additionally, the Wake Forest team is working with the U.S. Armed Forces Institute of Regenerative Medicine to utilize this technology on the battlefield, to print shut bullet wounds and blast damage.