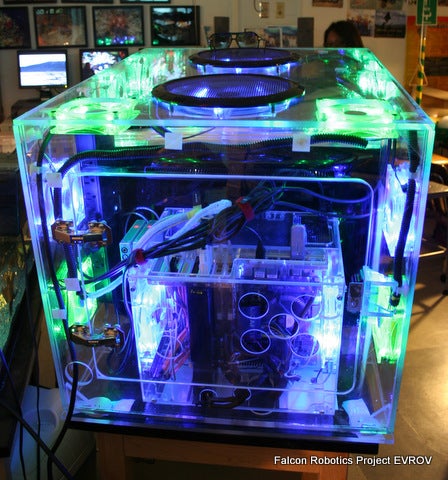 This past weekend, high school students from all over the country gathered at California’s NASA Ames Research Center to meet their brilliant peers, present their groundbreaking research — and chat with interested venture capitalists on the side.

The potential investors hovering in the background are one indication that the Conrad Spirit of Innovation Awards Summit, founded in honor of former astronaut Pete Conrad, isn’t your average science fair. Instead of just trophies, winners are presented with grant money they can use to turn their projects into commercial reality (top winners in each category receive $5,000; all finalists receive $1,000 in matching grants).

After honing their ‘bot-building skills at the National Underwater Robotics Challenge, the robotics club at Carl Hayden Community High School in Phoenix, AZ decided to up the ante by designing a robot to assist astronauts. Dubbed an EVROV (extra-vehicular remotely operated vehicle), the robot is equipped with a 3-D vision system that gives it two staggered views of its surroundings, offering the human operator greater depth perception that could come in handy for tasks like inspecting space installations or making repairs. “It’s docked outside the spacecraft,” team member John Harris says. “If there are any problems, you can go out there without an astronaut.”

By 2050, 75% of the world’s population will face restricted access to fresh water. That gave Javier Fernandez-Han — a homeschooler who hails from humid Conroe, TX — an idea: What if he could help reduce that shortage by extracting water from the surrounding air? The eventual result of that brainstorm was the $40 ACWa system, which sucks in ambient air and channels it into an underground chamber. In this cooler environment, water condenses out of the air, beads up on the walls of the chamber, and collects in a cistern, where it can be harvested for drinking or other uses.

Milken Community High School — a private Jewish school in the Bel Air neighborhood of Los Angeles — has long boasted high test scores and top-notch teachers, but a group of eco-conscious students thought the school’s environmental footprint needed fixing. They drew up a multi-part plan to bring the campus closer to sustainability, including installing high-efficiency solar arrays and distributing reusable water bottles to students. Living in freeway-centric L.A. gave the team an offbeat energy-generation idea: placing wind turbines inside concrete highway barriers to harness the breezes passing cars kick up. Green MAST hopes its innovations will provide a blueprint for other aspiring eco-savvy campuses to follow. “It’s not just for our school,” says team member Rachel Weitzman. “It’s for everyone.”

Food that’s practical for outer-space consumption has to meet a slew of requirements: It has to be portable, it has to be lightweight, and it has to provide a diverse array of the nutrients astronauts need to function. The AM Rocks team from Michigan’s Battle Creek Area Math and Science Center took on the challenge, and their Solar Flare Star Bar — a finely-tuned mixture of whole oats, dried fruit, puffed rice, vitamins, and minerals, with a smidgen of cinnamon for flavor — meets NASA’s space-food criteria. (Taste-testers gave it a big thumbs-up, to boot.)