According to Megadeth there are 99 ways to die, but many of those — blood clots, dehydration, heart attacks —... 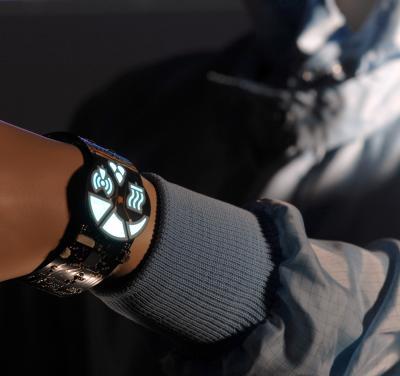 According to Megadeth there are 99 ways to die, but many of those — blood clots, dehydration, heart attacks — can be hard to detect except with a thorough medical examination. But since we can’t spend all of our time under doctor’s observation, a team of European researchers, including Fraunhofer Institute scientists, is developing a lab-on-a-chip wristwatch that monitors various bio-indicators of bodily disaster, warning wearers of impending doom before problems become life-threatening.

Inconveniently, this prototype wristwatch doesn’t tell the time, but it will tell an athlete if his or her perspiration shows signs of dehydration, or whether a person wearing a pacemaker is wandering too close to a dangerous electromagnetic field. It can help an elderly person ensure his or her body temperature doesn’t climb too high, and someday might even help diabetics monitor their blood sugar levels around the clock.

The watch itself is actually a mash-up of several lab-on-a-chip technologies, and could be customized for patients based on those conditions for which they are most at risk. Technologically speaking, new ultra-small biomarker sensors emerge all the time, like saliva tests that can instantly diagnose a heart attack, or single-drop, disposable blood tests that can rapidly scan the blood for indicators of impending thromboses. By stacking them in a single sensory device, the research team hopes to provide a means of catching potentially fatal medical incidents before they get into full swing.

Some of these systems are in their infancy and not necessarily suited for integration into a wristwatch device. The blood clot test, for instance, requires a prick with a needle and is generally only necessary in certain situations wherein the risk of blood clots is elevated, like when a patient is traveling by air (it’s also designed for one-time use).

But advances in both polymer electronics and conventional sensors have made these lab-on-a-chip biosensors increasingly small and affordable, meaning in the very near future patients at risk for a battery of illness could wear a diagnostic watch at all times, providing them with a constant stream of biofeedback. And who knows, maybe they’ll even integrate a clock into it.