Here at PopSci we’re always looking for the best and baddest in robotics news. But this week — National Robotics... 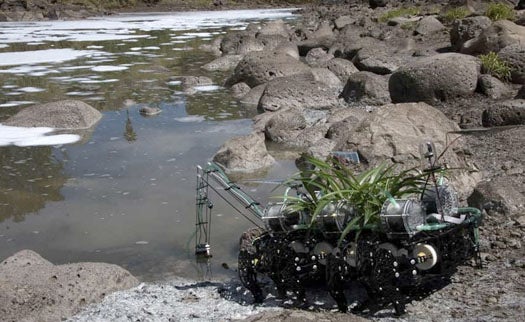 Here at PopSci we’re always looking for the best and baddest in robotics news. But this week — National Robotics Week — we’ll be ratcheting up our coverage, highlighting some of the most thought-provoking, future-driven concepts in robo-tech each day.

What if we could use our pollution as fuel? That notion seems intractable within the current energy paradigm, in which so many of our pollutants are byproducts of our fuels. But it’s precisely that idea that inspired Mexican artist Gilberto Esparza to create “Nomadic Plants,” a working art-bot that uses polluted water to power its fuel cell and feed the plants and microorganisms living symbiotically within the bot’s body.

The autonomous robot actively seeks out polluted streams, using the bacteria it finds in dirty water to power its fuel cell, which in turn powers the bot’s on-board circuitry. Any excess energy is used to sustain the native plants and organisms that ride aboard the Nomad, ensuring every bit of energy produced from the polluted water gets used.

Nomad Plants, of course, is part robot, part commentary; Esparza wanted to create a robot that was both a solution and a means to raise awareness of the role that humans play in either balancing or disrupting Earth’s fragile ecosystems. Via Esparza’s press release:

“At this point, it is important to highlight the ambiguous potential of the transforming power of the human species, due to its ability to destroy but also to restore. For that reason, what is required is a new way of thinking, which would position us as antibodies on the planet, and a proper understanding of the importance of living in symbiosis with our planet and with all species.”

Humans as antibodies, robots as walking greenhouses, pollution as fuel; it would seem like a lot of high-minded hot air, if the robot didn’t actually work. Nomad Plants is on exhibit at Laboral Art and Industrial Creation Centre in Gijon, Spain, through June 7 of this year.