If something doesn’t smell right, the Army wants to know about it. But while the Pentagon has been angling for... 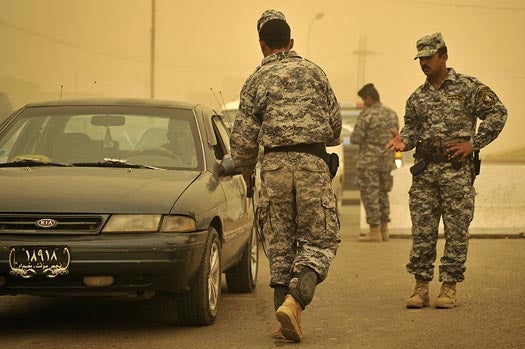 If something doesn’t smell right, the Army wants to know about it. But while the Pentagon has been angling for a biosensors that can smell fear or nervousness in a person’s bodily emanations for some years now, the Army wants something more: The ability to “uniquely identify an individual based on scent” from a distance or even days after the person has left the scene.

Human odor is a mélange of molecules that can be incredibly tricky to identify, but the army thinks that by doing so it could smell a threat coming and even sniff out an offending person who long since fled the scene of a crime. In Iraq, the Army has several cooperative methods of collecting biometric data on citizens at checkpoints – facial images, fingerprints, iris scans, etc. – but no real means of identifying those people operating outside of the law. The Identification Based on Individual Scent (IBIS) program aims to develop improved methods for identifying people from a distance with or without their cooperation.

The idea rests upon research that has shown that unique genetics create particular volatile organic compounds unique to each individual. Current technologies like the E-Nose developed under a DARPA biosensor initiative can distinguish between two different people but require a dose of smell from each person’s armpit. The Army wants something that can tap into that unique molecular signature before potential threats get close enough to harm troops.

It all sounds a bit clandestine and Big Brother-ish, but the Army sees it as a means to profile and bio-tag a prospective suicide bomber before he or she gets close to a checkpoint or hunt down insurgents using the scents they leave behind in safe houses. Not to mention, such a magic wand could have vast implications for conventional crime fighting; just wave it over the scene of a crime and you get the unique identifying molecular signature of anyone who was in the room.

That’s not all the Army wants; it’s also launching an initiative titled “Forensic Facial Image Analysis providing 3D Mapping, Metatagging, Comparative Operation and Search System” for cataloging and identifying individuals based on distinguishing features like tattoos, scars, moles and piercings, as well as a “Human Signature Collection and Exploitation via Stand-Off Non-Cooperative Sensing” program that will explore ways to scan faces in a crowd to determine hostile intent based on thermal imaging. Because if you have to be close enough to swab a potential threat’s armpit, you’re already way too close.