VTOL Drone Would Land, Refuel and Take Off By Itself

No really, you can let go 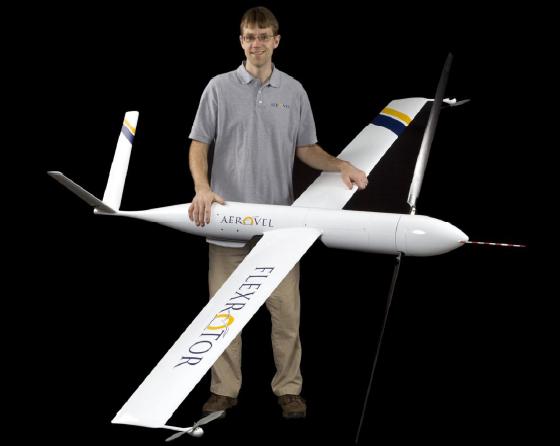 Drones can do just about everything autonomously these days, but most systems still require human assistance to land, refuel and take off again. Now, an aerospace startup, Aerovel, hopes to change that with its hover-capable Flexrotor drone that will come with its own automated docking station. No human ground support needed, The Register reports.

The notion comes from Tad McGeer, a Silicon Valley entrepreneur who created the small ScanEagle drone for fishermen and U.S. Navy SEALS. ScanEagle relied upon a pneumatic catapult launcher and “SkyHook” recovery pole, but the Flexrotor would do away with either requirement.

Instead, McGeer envisions his new drone using VTOL (vertical takeoff and landing) abilities. Tiny wingtip thrusters would do the same job as a helicopter’s tail rotor and counteract the torque of the drone’s main propeller in hover-mode.

That would permit the Flexrotor to land in its auto-base, refuel and launch back into the air with no human intervention. One human handler could then oversee an entire swarm of drones, which translates into big economic savings from the reduced manpower.

More drones such as the familiar Predators flying recon and strike missions above Iraq and Afghanistan may also soon get automated landing systems, if only because the military wants to cut back on drone losses due to human operator error.

But the Flexrotor truly seems unique as a practically self-sufficient drone. We’re just waiting for that future drone to announce: “All your auto-base belong to us.”