People who hate wearing 3-D glasses may like a new approach from a company called pCubee. A handheld cube-shaped device... 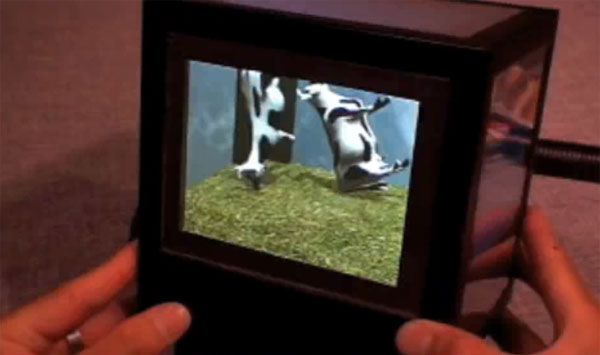 People who hate wearing 3-D glasses may like a new approach from a company called pCubee. A handheld cube-shaped device uses small LCD panels on all sides to create the illusion of playing with 3-D objects within a virtual cube, such as tiny cows or a pinball-style game, Technabob reports. You know you always wanted to toss tiny cows around inside a cube.

The idea draws on a 3-D display approach known as fishtank virtual reality, where a real-time physics simulation engine coupled with the user’s head perspective creates the constant sense of interacting with a 3-D world contained inside the device.

Users wear a pair of headphones that tracks their head movement, and can hold pCubee in one hand as they do more fine-tuned control with a regular computer mouse held in the other. A stylus also allows users to poke or prod objects bouncing around inside pCubee.

Researchers at the University of British Columbia envision their viewing tank as having a future in games, storytelling, and education, as well as in viewing 3-D maps of the human heart or architectural mockups.