Wait, don't call it a microphone -- it's an acoustic vector sensor 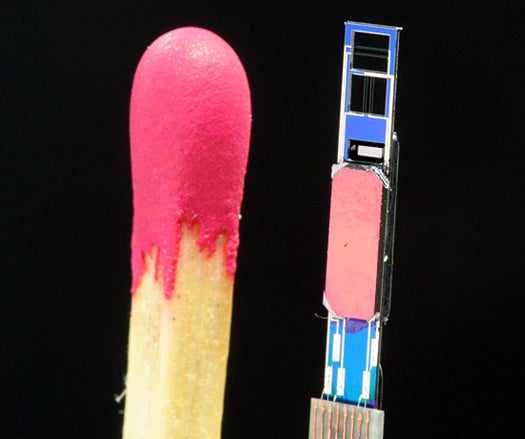 Between the yelling of sergeants, the rumble of jet engines, and the deafening pop of gunfire, a soldier’s sense of hearing rapidly deteriorates in the heat of battle. Luckily, the Dutch company Microflown has designed a special microphone that can do a soldier’s listening for him. By measuring the mechanical movement of individual air particles, as opposed to sound waves as a whole, the device can not only pinpoint the origin of sniper fire or approaching aircraft, but detail their make and model, as well.

Rather than using vibrations to detect sound, the mic uses platinum strips only 600 atoms wide. Two pairs of strips are arranged in different directions. Air molecules passing between the strips cool the strips at different speeds depending on the direction of flow, and a computer then interprets that cooling as an exact x, y, and z source for the sound.

The device can also determine the pitch and character of the noise to distinguish between distant explosions, human screams, and chopper blades. Plus, since each mic is only the size of a match head, each soldier can carry one individually, giving them personal autonomy, or turning a squad into one giant listening post.

So far, the armies of the Netherlands, Germany, India, Poland, New Zealand and Australia have agreed to test the device out.