President Obama likely faces a tough crowd when he attempts to articulate his vision for NASA in Florida next month,... 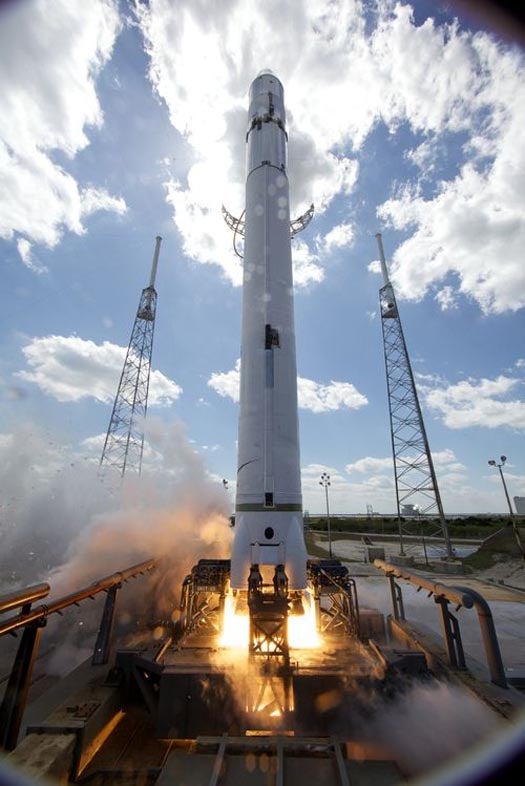 President Obama likely faces a tough crowd when he attempts to articulate his vision for NASA in Florida next month, but in the meantime the private space industry he’s thrown his support behind continues to make strides. Private space tech company SpaceX just completed its first successful test-fire of its Falcon 9 rocket on the launch pad, meeting a critical benchmark in its mission to launch cargo and astronauts into orbit.

Though SpaceX has already deposited a satellite into space via its smaller Falcon 1 rocket, the successful firing of the larger Falcon 9 could kick-start privately funded space enterprise by enabling the company to launch large payloads skyward. The static firing of the Falcon 9’s nine kerosene and liquid oxygen-burning motors lasted only 3.5 seconds — a bit anticlimactic, sure — but it clears the way for what could be a maiden voyage for the Falcon 9 as April 12.

If that flight succeeds, SpaceX could be well on its way to fulfilling some of the nearly $1.9 billion in cargo resupply contracts it already holds with NASA. But the company still needs at least three years to sort out the logistics of safe passenger flight.

Proving that a private company has the technological chops to put large payloads into space is a big step not only for Space Exploration Technologies, but for the President as well; Obama proposes pushing $6 billion of NASA funds toward private firms that can ferry cargo and manpower to the ISS. Under this scheme, NASA could then focus on deep-space missions and an eventual manned Mars mission, but some Florida legislators are against moving money and jobs out of Florida (SpaceX is based in California, though the test fire took place at Kennedy Space Center in Cape Canaveral, Fla.).

SpaceX received its FAA license to launch last week and is only awaiting a green light from the Air Force regarding its abort systems. Assuming that comes through, the Falcon 9 could undertake its maiden voyage next month.