Sudden temperature changes, the classic weakness of ceramics, are no problem for these high-strength materials 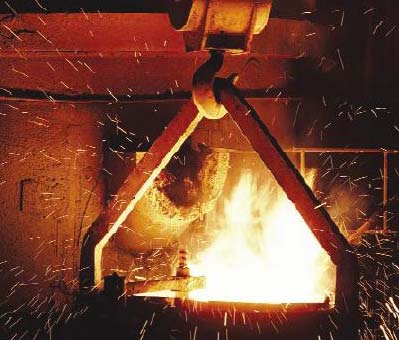 Metal alloys have served as the proverbial backbone for car engines and jet turbines alike because of their high strength and ability to resist sudden temperature changes. Now a lighter, cheaper ceramic material that also resists temperature changes may become a viable replacement for expensive metal, according to New Scientist.

Most hot ceramics will fracture and crack if dunked in cold water, because the material contracts too quickly. But the Chinese Academy of Sciences in Beijing has come up with a new family of ceramics that wrap themselves in a buffer layer of insulating air, which protects against the sudden temperature changes.

The new ceramics held their strength even after reaching temperatures of 5,810 degrees F and then being quenched in cold water.

Chinese researchers created the self-insulating ceramic by roughening the surface with plasma etching and acid treatments. The ceramic surface ended up with repeating fin shapes similar to the nanoscale patterns of lotus leaves — a hydrophobic surface that repels water. The roughened surface also traps pockets of air that become the buffer against sudden temperature change.