The landmark Hangar One needs a giant new Teflon skin to replace its toxic siding, but funding is an issue 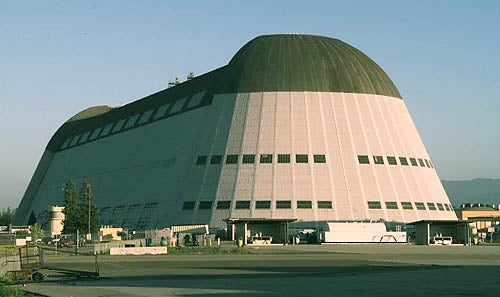 Hangar One’s behemoth structure once housed airships such as the doomed U.S.S. Macon, and is so large that clouds can supposedly form and rain inside it. Now NASA and the U.S. Navy have promised to replace the hangar’s toxic siding with a new Teflon-covered fiberglass fabric skin, The Register reports.

But that can only happen if NASA can somehow scrape together $15 million to $40 million for the job — the Navy has only taken responsibility for removing the old siding. The U.S. space agency is considering turning to private development funds to restore the hangar, according to the Mountain View Voice.

The Silicon Valley relic had begun leaking toxins into San Francisco Bay after every rainfall, and so the Navy first planned to demolish the structure in May 2006. But it backed away from that plan after locals rallied to save the 1930s-era hangar.

Hangar One’s full dimensions stand at 1,133 feet long, 308 feet wide and 198 feet tall, for a total of 6,500,000 cubic feet. It’s a fairly tall order for a restoration job, and some preservationists fret that the huge skeletal structure would suffer exposure to the elements if there’s no new skin ready to replace the old siding. The Navy has pushed its siding removal plan back to mid-December.

We like to focus on the new upcoming airships being deployed by the U.S. military and some civilian entrepreneurs. But perhaps people can all draw on some Sky Captain-style nostalgia and start a grassroots campaign to save the old hangar, as one NASA employee suggested.

[Mountain View Voice via The Register]