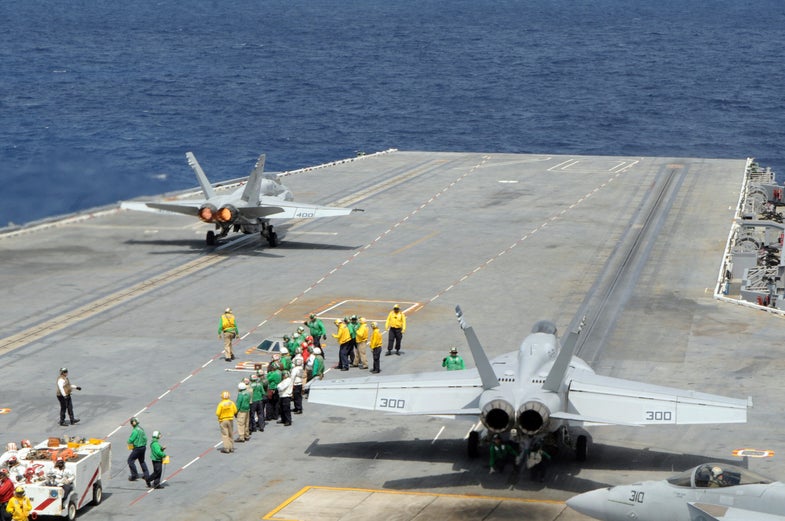 090715-N-6106R-347 ATLANTIC OCEAN (July 15, 2009) An F/A-18 Hornet from Strike Fighter Squadron (VFA) 34 launches from the No. 1 catapult aboard the aircraft carrier USS Carl Vinson (CVN 70) as an F/A-18E Super Hornet from Strike Fighter Squadron (VFA) 136 prepares to launch from the No. 2 catapult. Carl Vinson is underway in the Atlantic Ocean conducting flight deck certification after completing its scheduled refueling complex overhaul at Northrop Grumman Shipbuilding. The overhaul was an extensive yard period that all Nimitz-class aircraft carriers go through near the mid-point of their 50-year life cycle. Carl VinsonÕs nuclear fuel was replenished and the shipÕs services and infrastructure upgraded to make her the most state-of-the-art aircraft carrier in the fleet. (U.S. Navy photo by Mass Communication Specialist 2nd Class Stephen Rowe/Released). MC2 STEPHEN ROWE
SHARE

Making U.S. Navy carrier groups and Army bases more self-sufficient and energy-efficient could mean turning to mobile nuclear reactors. The Pentagon’s DARPA scientists have put forth the modest proposal of deploying miniature reactors to convert hydrogen and carbon into military jet fuel, as well as providing power, The Register reports.

That plan could fit well with the U.S. Navy’s “Green Strike Group” concept for biofuel and nuclear-powered vessels. The Register points out that nuclear-powered aircraft carriers could make use of seawater to make JP-8 jet fuel from carbon dioxide and hydrogen, courtesy of work by the U.S. Naval Research Laboratory.

This gets trickier for U.S. military land bases that lack easy access to carbon feedstocks or massive quantities of water, but DARPA does hint at making use of the sewage lakes that have accumulated next to some bases in Afghanistan. Still, trucking in huge amounts of water could prove unwieldy.

DARPA ultimately hopes for portable nuclear reactors that can provide 5 to 10 megawatts of electricity and produce 15,000 gallons of JP-8 or road fuel every day — about enough fuel to top off a Chinook helicopter a dozen times, according to The Register.

Perhaps the biggest technical challenge is creating such small nuclear reactors in the first place. But at least Microsoft founder Bill Gates and others have already begun backing plans for shrinking nuclear power to portable sizes.