It's the telescope's most extensive survey ever 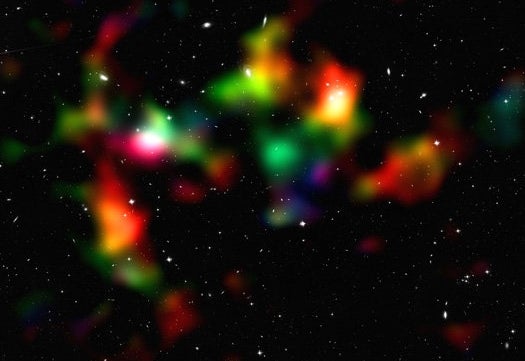 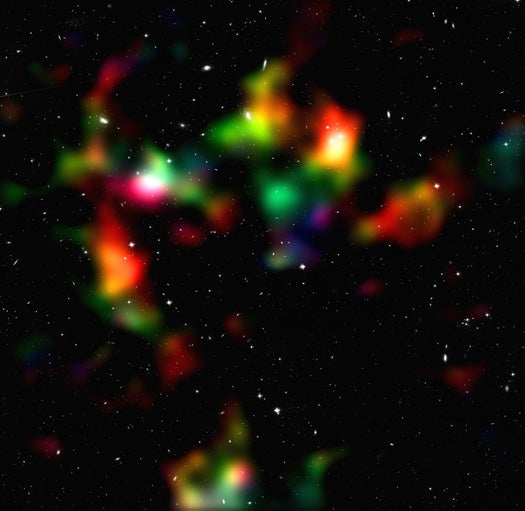 Using the widest galactic survey ever conducted by Hubble, researchers think they’ve independently verified the existence of dark energy tugging at the cosmos, as well as reinforced tenets of general relativity theory. The image above was inferred from the weak gravitational lensing distortions imprinted onto the shapes of background galaxies, and the color-coding indicates the distance of the foreground mass concentrations. Structures shown in white, cyan, and green are typically closer to us than those indicated in orange and red.

Results from the largest and most ambitious survey of the cosmos ever undertaken by the Hubble Space Telescope are in, and the findings are commensurately big, suggesting dark energy is indeed real, and the general theory of relativity holds up even under larger intergalactic scrutiny.

The survey covered more than 446,000 galaxies in the COSMOS field, captured by 575 slightly overlapping images of the same corner of the universe taken by Hubble over nearly 1,000 hours. The researchers also tapped into redshift data from ground-based observation instruments to measure the distances of the galaxies surveyed.

The data, when pulled together an analyzed, allowed researchers to paint a detailed picture of matter distribution in space over great distances by looking at the distorted shapes of distant galaxies, a phenomenon known as weak gravitational lensing. The resulting data gave researchers unprecedented views of the shapes of distant galaxies that in turn lend further clues to how the universe is expanding.

So how is it expanding? The study suggests that indeed the universe’s expansion is accelerated by a mysterious component known as dark energy, adding credence to a handful of other independent studies that suggest the same. Explained by Harvard University’s William High, co-author of the study:

“Before, most of the studies were done in 2D, like taking a chest X-ray. Our study is more like a 3D reconstruction of the skeleton from a CT scan. On top of that, we are able to watch the skeleton of dark matter mature from the Universe’s youth to the present.”

The weak lensing method of measuring the galaxies also further proved out Einstein’s general relativity theory, as the theory predicts accurately how the lensing signal depends on redshift to get accurate readings of distant bodies.

As a bonus, the cosmic CT scan makes for a pretty picture. If the one above tickles your fancy, there are a few more (as well as high-res options) here.