High costs, in money and energy, limit the usefulness of desalination as a way to provide drinkable water in disaster... 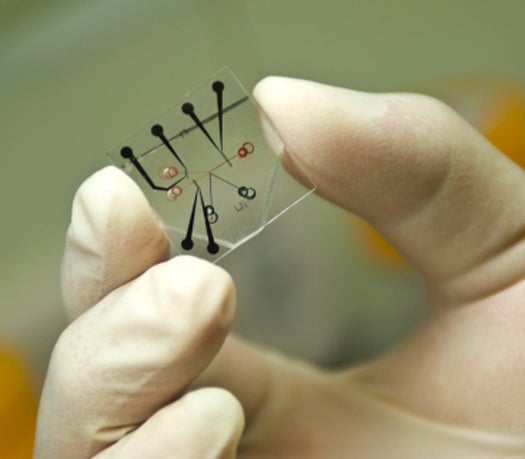 High costs, in money and energy, limit the usefulness of desalination as a way to provide drinkable water in disaster areas. However, a new method could lead to portable desalination devices simple enough to run off solar power or a battery, but powerful enough to supply a family, or even a small village, with clean water. Additionally, the new desalination device also cleanses water of biological contaminants.

Developed by scientists at MIT, the desalination device is about the size of a postage stamp, and can be fit together into larger daisy chains. An eight-inch-wide array of the desalination chips can produce four gallons of clean water every hour, while only using as much electricity as a light bulb. Plus, when tested with water mixed with plastic bits, human blood, and miscellaneous proteins in addition to salt, the unit pumped out 99-percent-pure water.

The desalination chips separate water from contaminants by repelling the foreign particles electrically. Since this method does not use filter, the system can operate without high pressures. Simply pour the contaminated or sea water in the top, and wait for the pure water to come out of the bottom.

According to the developers, it will take about two years to develop a commercial product containing 10,000 desalination chips. Whether this technique can expand beyond portable low-energy systems, and into the sort of large-scale desalination that provides many Middle Eastern countries with potable water, remains to be seen.