Today the Federal Communications Commission unveiled its plan to expand broadband Internet access to 100 million more Americans within the... 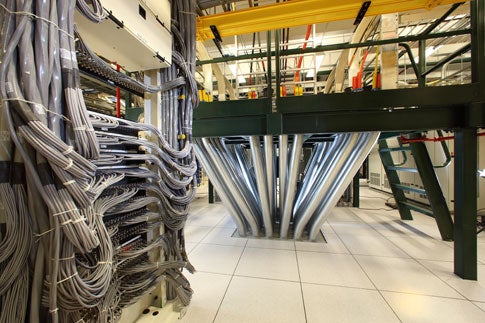 At Terremark's Miami headquarters, undersea Internet cables emerge from the Atlantic and connect to the rest of the country. John B. Carnett
SHARE

Today the Federal Communications Commission unveiled its plan to expand broadband Internet access to 100 million more Americans within the next five years. The plan calls both for the expansion of wired networks in under-serviced areas, and for the dedication of more wireless spectrum for Internet use as opposed to television. Largely deficit-neutral, the plan has bipartisan support in the current Congress, in part because contentious issues of net neutrality and privacy were not tackled by the FCC’s plan. As you remember, PopSci called for an improvement to the nation’s broadband infrastructure last year

The FCC’s plan involves the expansion of both home broadband capacity, but also pays special attention to ensuring that hospitals, libraries, and schools, where most Americans currently use broadband Internet services, get upgraded as well. Ultimately, the FCC hopes to provide 50 megabits per second of upload speed, and 100 megabits of download speed, to another third of the US population over the next decade. Additionally, the FCC wants 500 megahertz of wireless spectrum, currently operated by TV stations, rededicated to servicing mobile devices.

Estimates place the cost of the plan at between $15.5 and $25 billion, but FCC claims that the majority of that money will come from altering the Universal Service Fund, a program to subsidize rural phone service paid for by telecomm companies, from paying for telephones to paying for broadband. Additional funds will come from the auction of wireless spectrum for mobile device use. And if that doesn’t cover the bill, the FCC has plans to ask Congress for a one-time, $9 billion boost.

The FCC, the telecommunications industry, and Congress all agree that the expansion of broadband is key to ensuring that America remains competitive in the world. The integration of TV and the Internet, the digitizing of medical records, and an increased use of cloud computing all threaten to tax America’s currently limited broadband infrastructure. Despite having more broadband users than anywhere else in the world, the US only ranks 19th in percentage use, according to the Organization of Economic Cooperation and Development, behind economic competitors like South Korea, Germany, and Great Britain.

Starting at the end of the month, Congress will begin holding hearings on the plan. However, with a lawsuit between the FCC and Comcast over the FCC’s ability to regulate the Internet still undecided, the climate change bill poised to distract the Commerce Committee members tasked with FCC oversight, and an election in November that could reverse party control in Congress, it may be some time before the FCC can begin implementing the plan in full.

[The NY Times, Reuters, The BBC]