Gracefully lowered from a hover to the ground 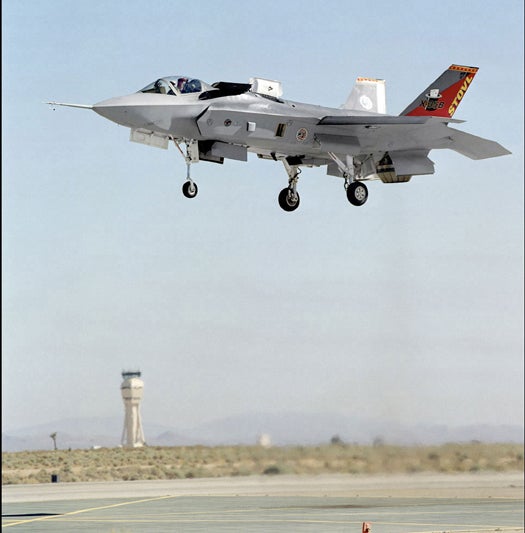 After cost overruns, a series of delays, and almost a decade of hype, the F-35 Lighting finally performed a vertical landing for the first time. Yesterday at 1 P.M., after descending from a 150-foot-high hover, the test plane touched down on the tarmac at the Patuxent River Naval Air Station. This is a significant step forward for the F-35, as its vertical takeoff and landing capability are crucial to the fighter’s role as a replacement for the aging Harrier jet.

The test began with a short runway takeoff at 93 miles per hour, after which the pilot swung around, positioned the plane over the runway, and lowered it down. The test pilot, a former Royal Air Force aviator with experience piloting VSTOL planes, said he found landing the F-35 vertically far easier than landing older planes, like the Harrier, the same way.

This test moves the F-35 program significantly closer to deployment. In fact, the Marine Corps hopes to start training its first round of F-35 pilots this fall. However, with February’s announcement that the entire program has been delayed a year, and cost overruns threatening automatic program restructuring under the Nunn-McCurdy Amendment, I wouldn’t bet on the Marines keeping to that schedule, even in light of this recent successful test.