Radar is great for tracking objects in the wide-open sky or even at sea, but when you try to take... 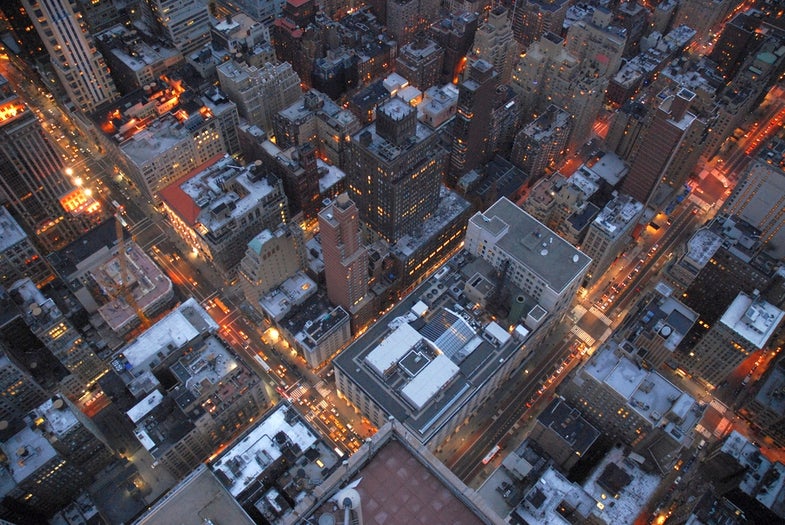 Radar is great for tracking objects in the wide-open sky or even at sea, but when you try to take it to street level you run into some obstacles — literally. Radar requires a good line of sight, and obstructions like buildings or terrain features can render radar useless. But now, using a handful of unmanned aircraft and technology that allows them to intelligently reflect radar off buildings, DARPA is developing a system that should be able to track individual vehicles even as they dart between skyscrapers and other structures.

Dubbed Multipath Exploitation Radar, the system works by using buildings as mirrors, bouncing radar off of surfaces to “see” around corners and keep tabs on vehicles even without direct line of sight. First the MER system uses LIDAR — optical surveying tech that is already packed on many aircraft — to create a 3-D map of a city. That model of the city allows the system to calculate which reflective angles can best keep an eye on a particular vehicle even when it is obscured by a structure.

Using Ku-band radar, the MER is sensitive to even slight differences between similar vehicles, ensuring that the target car isn’t lost in the mix of traffic even when the signals are bouncing off of buildings. That’s a key component of MER that can’t fail if the system is to work in crowded urban environments. And it will have to; DARPA thinks that once a LIDAR model of a city is made, MER can cover a swath of terrain more than 600 square miles in size.

But MER has some obstacles of its own to overcome before it starts seeing through buildings. The key challenge is maintaining a lock on the target as the radar re-orients itself from line-of-sight to reflection and back, perhaps multiple times very rapidly as a car speeds through urban streets. In the meantime, the ever-ambitious DARPA is looking into developiong an algorithm that would allow MER to track several vehicles in different areas at once.