My rocket is almost as big as your rocket 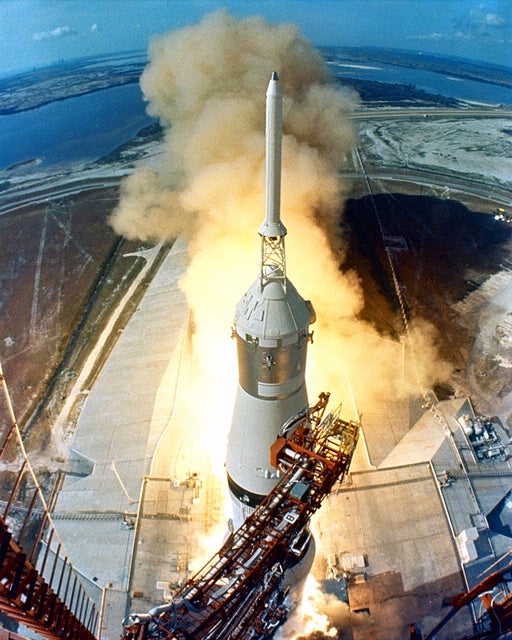 A behemoth rocket to reach the moon. NASA
SHARE

China’s new moon rocket design is in the class of the old Saturn V that once launched U.S. Apollo astronauts to the moon. The China Academy of Launch Vehicle Technology says that the proposed rocket would have a thrust of 3,000 metric tons, just shy of the 3,470 metric tons of thrust generated by the Saturn V’s first stage, Aviation Week reports.

The announcements through Xinhua and the China Daily come barely a month after the Obama administration decided to cancel NASA’s Constellation program and the Ares rockets that represented NASA’s successors to the mighty Saturn V — the proposed Ares V might have had a thrust of more than 4,000 metric tons. The Constellation program had long been criticized for being unrealistic in its goal and over-budget given NASA’s existing funding levels.

The U.S. space agency has since focused on developing technologies such as inflatable space stations, orbital refueling and new robotic missions. It has also reached out a hand to help the growing U.S. commercial space industry.

China’s latest rocket development was first reported by the Xinhua news agency and the China Daily. Besides the giant moon rocket in the class of the Saturn V, China is also working on a medium-lift Long March 7 rocket that will join the Long March 5 and 6 rockets.

Such lift power will help China launch its own full-fledged space station before 2020, as well as the first of perhaps several “Tiangong” space labs next year, Aviation Week notes.

Chinese officials also recently announced China’s second batch of astronauts that includes the first two women taikonauts, Xinhua reports. The candidates mainly come from a pool of fighter pilots and must undergo stringent health checks. You can’t have bad breath on the moon, you know.