The Best Robo-One Vids: Combat, Carnage and At Least One Jacko Tribute

What’s not to like about some good old fashioned robot-on-robot violence? The 17th annual Robo-One competition just wrapped in Kawasaki... 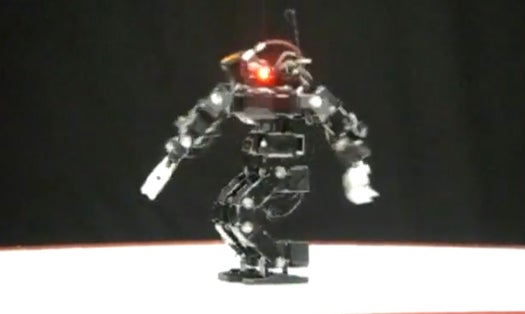 What’s not to like about some good old fashioned robot-on-robot violence? The 17th annual Robo-One competition just wrapped in Kawasaki City, Japan, and its YouTube channel is packed with vids of the important matches that shaped this year’s robo-wrestling throwdown. The drama was high, the action raw, and in the end Super Dygar II beat Neutrino (and the 36 ‘bots it faced previously) to take home first prize.

But as with so many tournaments, the championship round was not the most action-packed. This semifinal round between Neutrino and Stormwaves Light 2 was far more exciting, blow-for-blow:

Then there were the ‘bots that, for all their shortcomings as warriors, made being a biped look cool. Our favorite: this cycloptic bad boy getting down solo to Thriller. If you can’t go out with first prize for tearing your opponents limb from limb, you might as well go out with style.