Which Currently Available 3DTV Is Best?

There are just two 3DTVs on the market right now—a plasma from Panasonic and an LCD from Samsung. Luckily, that...

There are just two 3DTVs on the market right now—a plasma from Panasonic and an LCD from Samsung. Luckily, that means it’s really easy to spot which is the best.

We tested two HDTVs that use the new Full HD 3D standard: the $2900 Samsung UN55C7000 (a 55-inch LCD, on the left in the photo) and the $2500 Panasonic TC-P50VT20, a 50-inch plasma on the right. We tested them with the requisite 3D glasses and a Panasonic BD-C6900 3D Blu-ray player playing both a 3D movie (Monsters Vs Aliens) and a disc of sample footage that came with the Blu-ray player.

Both displays require you to look like a dork by wearing a pair of 3D glasses. That’s what produces the 3D effect: the glasses contain LCD shutters that turn on and off to show each eye a separate image 60 times a second. Without the glasses, you see a confusing mess of two images slightly offset. With them, you see the 3D effect, but this means that you need a pair for every person watching, and they cost $150 each. 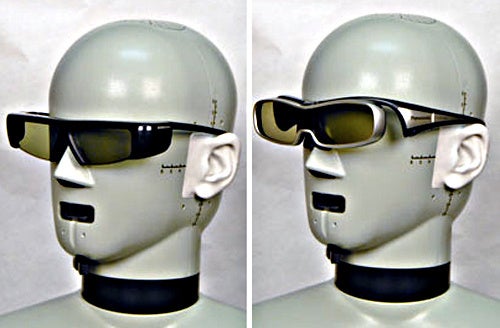 3D Glasses Side By Side

The Panasonic 3D glasses (left) are arguably less dorky looking, although they aren’t going to win any design prizes. The Samsung 3D glasses (on the right) are larger, heavier and somewhat more nose-ache-inducing; the weight sits right on the bridge of the nose and feels like you have a slight head cold. The Panasonic glasses are also more adjustable, coming with 3 different nose bridges and a neck strap. You can’t adjust Samsung’s glasses at all.

In use, we found that both HDTVs produced a decent 3D effect, with a good sense of depth to the images. This experience was far from perfect, though; the 3D effect often broke down when the camera panned around or moved quickly. That’s because the 3D effect relies on the brain detecting the differences between the two images, and that doesn’t work when it can’t figure out the difference between one blurry mess and another.

The Samsung displayed an annoying issue with a ghost image that showed up around the edges of objects, caused by some of the left frame getting into the right eye and vice versa (the technical term is crosstalk). Indeed, the Panasonic actually had the same issue, but to a much lesser degree. It isn’t yet clear if this phenomenon is caused by a slight mismatch between the timing of the frames on the screen and the shutters on the glasses, or by a lag in the response time of the LCD screen that the Samsung uses. Plasma displays like the Panasonic TC-P50VT20 can react much faster than an LCD, so the screen can show the two images with much less interference between the two. Whatever the cause, it is very irritating and distracting. 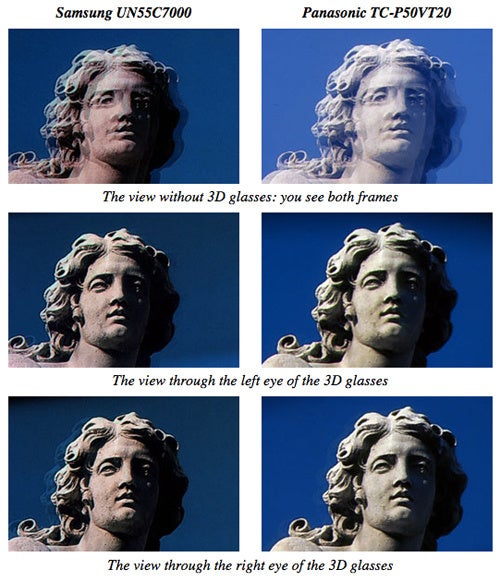 Watching a movie, we found that the Panasonic was better for extended viewing; although the glasses are heavier, the 3D effect felt more comfortable over time, and the crosstalk between the frames was less annoying. But while the Panasonic HDTV produced the more pleasing 3D effect overall, neither 3D TV was as convincing as seeing the movie on the big screen: the image didn’t pop out of the screen on either TV in the way that the adverts imply, even when the filmmakers used tricks like objects flying into the screen. Those didn’t really work in the 1950s, and they don’t work now.

Size has a lot to do with this. Even at 55 inches, the physics of 3D are against home theater enthusiasts. So you’ll still want to glue your face to the screen to maximize the 3D effect.

Then there’s the issue of price…

As well as the cost of the TV itself, don’t forget to include the cost of the glasses ($150 a pop: you get one set with the Panasonic and none with the Samsung) and $400 for the 3D Blu ray player, because your existing one won’t play 3D Blu ray discs (though the PS3 will receive an update this summer). Total that all up for a family of 4 and you are laying out a hefty $3700 for the Samsung or about $3350 for the Panasonic.

And don’t forget that you’ll need to find something to watch—the only option right now is the execrable animated movie Monsters vs. Aliens, which gets old pretty quickly. At the moment, that’s the only 3D Blu-ray available, so you’d be better off getting your 3D kicks from going to see Avatar again and saving your cash until the price of the glasses for these 3D HDTVs falls.

But if you are dead set on being the first one on the block to have a 3D HDTV, the Panasonic TC-P50VT20 is the better pick right now. The Panasonic produces the stronger and more convincing 3D feel, and comes with one pair of glasses. The Samsung is a bigger, brighter and perhaps better overall HDTV, but the 3D is still a little glitchy and you don’t get any glasses with it.

Basically, you may one day choose to watch 3D on the Panasonic. But the Samsung teeters on “just because you can doesn’t mean you should” territory.

For more information, read these full reviews of the Samsung UN55C7000 and the Panasonic TC-P50VT20..

Richard Baguley writes for Televisioninfo, who produce in-depth, unbiased scientific reviews of televisions. He is currently working on expanding their scientific testing into the 3D realm.