From Malaysian Architects, a Parallel Prison World in the Sky

The designers were inspired by the idea of prisoner rehabilitation 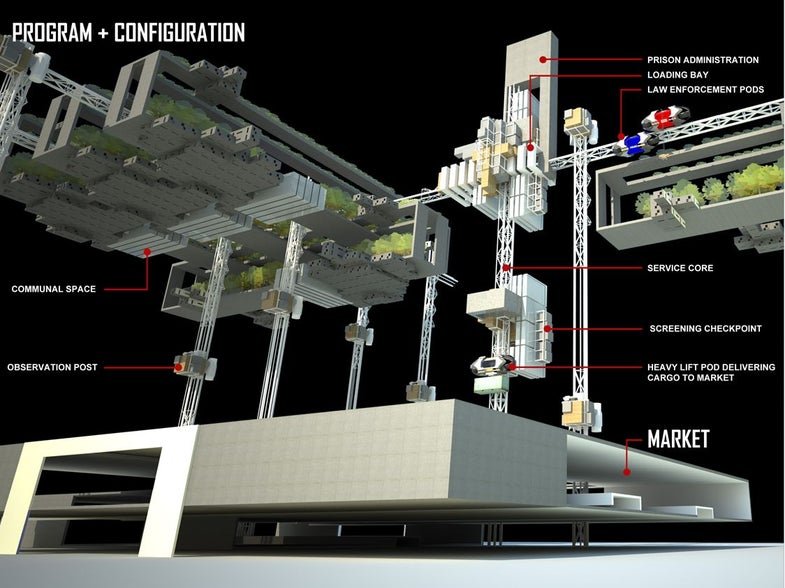 Prisoners pose an age-old dilemma for societies: try to keep them separated from the good citizenry while possibly easing some of the black sheep back into the fold. Now Malaysian architecture students have hit upon the solution of a sky prison city that allows prisoners to work in farms and factories to contribute to the host city below, CNET reports.

Convicted criminals, prison employees, and cargo would shuttle back and forth to the great big prison in the sky on pods that travel on the prison’s supporting structural legs. Different pod types include a heavy lift cargo pod, a medevac pod, and an armored riot control pod that drops police on lines, commando-style.

Modular prison cells might also give inmates a glimpse of the world below as a source of inspiration, even as they spend their days doing honest work for society. The Malaysian concept won first place in eVolo magazine’s 2010 Skyscraper Competition, out of 430 entries from 42 countries.

A sky prison may also beat the old penal colony practice of simply dumping prisoners in foreign lands, even if that practice did result in the fine nation of Australia. And who wouldn’t want to have a sky prison that seems to hover above their city in the style of District 9?

On the downside, some screenwriter may already be feverishly typing up a horrendous spiritual sequel to Escape from L.A.