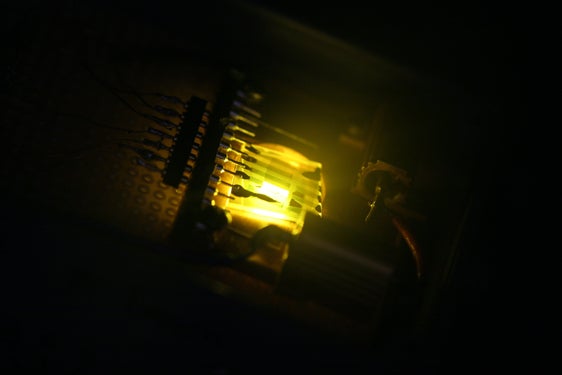 Graphene may brighten the future more literally than we had originally anticipated, besides merely revolutionizing electronics and Silicon Valley. Swedish and American researchers have transformed the one-atom-thick carbon material into a new, inexpensive lighting component that could give organic light diodes (OLEDs) a run for their money.

An OLED simply consists of light-generating layer of plastic sandwiched between two electrodes, one of which is transparent. This provides an ultra-thin, power-sipping technology for everything from smart phones to TVs, but it comes at a relatively high manufacturing cost. The OLED transparent electrode also uses an indium metal alloy, which presents the problems of being rare, expensive and difficult to recycle.

“By using graphene instead of conventional metal electrodes, components of the future will be much easier to recycle and thereby environmentally attractive,” said Nathaniel Robinson, a chemical engineer at Linkoping University in Sweden.

Making the new graphene-based light-emitting electrochemical cells (LECs) can involve just liquid solutions or a printing press-style machine. That paves the way for inexpensive production of plastic-based lighting or displays. The researchers envision flexible LEC sheets that could be rolled up or placed almost anywhere.

Graphene has proven a promising but difficult material to manufacture in the past, because researchers often had to clumsily chip away at graphite in hopes that graphene might flake off. But a recent flurry of developments such as this suggests that the manufacturing problems are rapidly disappearing.

It’s still hard to tell whether the graphene LEC replacements can fully surpass OLEDs in terms of display and performance, but we’re anticipating good things.