Robot or human, Berkeley residents still have to put up with the noise 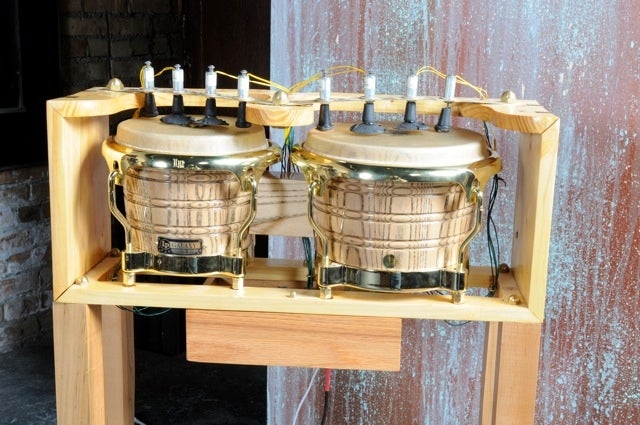 A musician has harnessed the power of two Nintendo Wiimotes to become a cyborg percussionist with the robo-band Jazari. His playing of one drum machine can evoke an automated response from another, so that he can go around the drum circle in a beautiful display of human-robot improvisation.

The man behind the machine, Patrick Flanagan, is a composer who cites music theory, music cognition, and machine learning as the three “chin-stroking disciplines” that influence his work. He created Jazari with a nod to Al-Jazari, a polymath of the Arab world in the 13th century who supposedly created the world’s first robot band.

Each of the Wiimote buttons can control higher or lower tones on certain drums, while tiling down or up controls volume. Tilting the Wiimote to the side and holding down a button can increase or decrease the repeating beat, ranging from quarter notes to 32nd notes.

Dually wielded Wiimotes also allows Flanagan to reverse the drum patterns on two drum machines, speed up one drum machine faster than the other, and do other neat tricks that alter the rhythm. Music geeks and curious readers alike can check out a full explanation below.